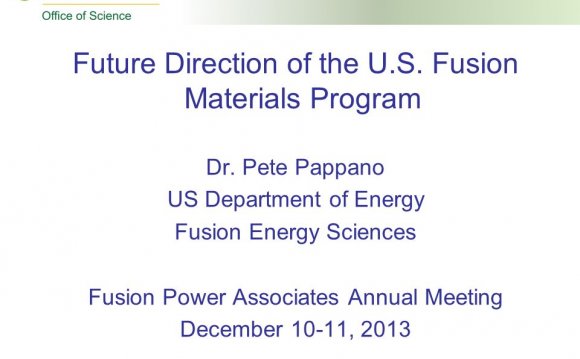 The award, presented at Fusion Power Associates annual meeting and symposium on December 5 in Washington, D.C., is presented to individuals who have shown outstanding leadership qualities in accelerating the development of fusion.

"Laser fusion has the potential to be a major new power source for the Nation, but there are scientific and technical challenges that need to be resolved, " says Obenschain. "The NRL laser fusion program has advanced a unique laser technology and high-performance target designs that could shorten the development time and cost for fusion power."

As head of the laser fusion program at the U.S. Naval Research Laboratory, Obenschain's research efforts include laser-plasma interaction experiments in large-scale simulations of pellet implosions in development of high-energy krypton-fluoride laser technology as well as in other critical areas of science and technology needed for laser inertial fusion energy.

In laser fusion small pellets containing frozen heavy isotopes of hydrogen (deuterium and tritium) would be compressed and heated by laser beams to initiate thermonuclear burn with the release of a large amount of energy.

Obenschain was project manager for the construction of Nike, the world's largest krypton fluoride laser facility. Nike has the deepest UV wavelength of all high-energy lasers, providing a distinct advantage in driving matter to the high velocities - hundreds of miles per second - required for fusion implosions. At present Nike is used by NRL scientists to study high-intensity laser-matter interactions in support of the Department of Energy's Inertial Fusion program.

About the U.S. Naval Research Laboratory

The U.S. Naval Research Laboratory is the Navy's full-spectrum corporate laboratory, conducting a broadly based multidisciplinary program of scientific research and advanced technological development. The Laboratory, with a total complement of approximately 2, 500 personnel, is located in southwest Washington, D.C., with other major sites at the Stennis Space Center, Miss., and Monterey, Calif. NRL has served the Navy and the nation for over 90 years and continues to meet the complex technological challenges of today's world. For more information, visit the NRL homepage or join the conversation on Twitter, Facebook, and YouTube.