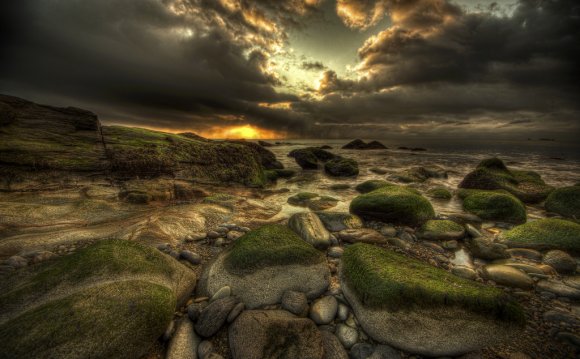 (Out of the Slime)

The Primordial Soup Theory suggest that life began in a pond or ocean as a result of the combination of chemicals from the atmosphere and some form of energy to make amino acids, the building blocks of proteins, which would then evolve into all the species.

The Primordial Soup Theory states that Life began in a warm pond/ocean from a combination of chemicals that forms amino acids, which then make proteins. This is suppose to happen at least 3.8 billion to 3.55 billion years ago.

The Russian Chemist A.I. Oparin and English Geneticist J.B.S. Haldane first conceived of this idea. Both developed this theory independently in 1920.

In this theory, the basic building blocks of life came from simple molecule which formed in the atmosphere (w/o oxygen). This was then energized by lightning and the rain from the atmosphere created the "organic soup". The first organisms would have to be simple heterotrophs in order to survive by consuming other organisms for energy before means of photosynthesis. They would become autotrophs by mutation. Evidence now suggest the first organisms were autotrophs

Chemist Stanley Miller and physicist Harold Urey did a famous experiment in 1950 to test this theory. They mixed gases thought to be present on primitive earth:

They then electrically sparked the mixture to signify lightning. The results were amino acids, the building blocks of proteins. It was later discovered that other energies also can excite gases and produce all 20 amino acids:

1. Amino acids have to become protein

c. Hard to hit the right protein by accident

d. Amino acids are building blocks, not the assembled structure

2. Early atmosphere contain different gases than those used by Miller/Urey

a. No ammonia and methane

b. Not reduced (opposite of oxidized)

a. System becomes less and less organized over time

4. Primordial soup too dilute to achieve anything

b. No mechanism to concentrate and make protein

This theory emphasize metabolism because of the cooperative group of molecules and how they gain and use energy and molecules.

In an experiment by Sidney Fox, heated amino acids drove

What is Primordial Soup?