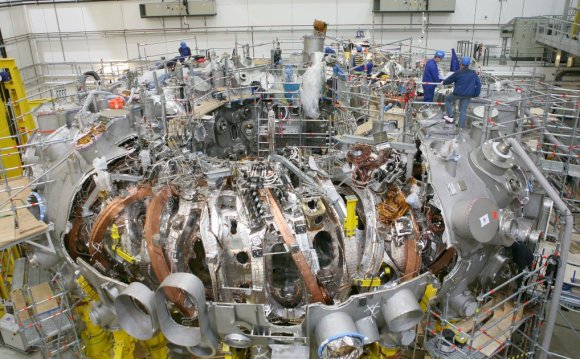 Work on the Wendelstein 7-X stellarator began in April 2005 and was completed in May 2014. After more than a year of testing, the facility was ready for its first trial run, which was conducted on December 10. In this test, researchers injected one mg of helium gas into the reactor vessel and applied microwave pulses to heat the gas to 1 million Kelvin (1.8 million° F). A small flash of plasma lasting approximately one-tenth of a second was captured by the facility’s cameras and sensors.

With a successful helium test under their belt, the Max Planck physicists plan to continue their experiments with helium, trying to improve the microwave heating regimen and extend the duration of the plasma generation. The team expects to complete their helium trials in the next few weeks and then will begin focusing on producing hydrogen plasma starting in 2016.

The Wendelstein 7-x is the largest stellarator fusion device in the world. It features a low-current design that uses 50 twisted magnetic coils to contain the reactor’s super-hot plasma. Because of its unique design, the reactor can theoretically operate for more than 30 minutes per run. The stellarator is much more efficient than the circular-shaped tokamak nuclear fusion reactors, which require a large current to operate and are capable of producing energy only in short bursts.

Physicists working at the Wendelstein 7-x are hopeful that the fusion reactor can eventually provide a continuous source of cheap, clean energy. Scientists around the world also are excited by achievements of the Max Planck team. “If it does burn – and all the predictions are that it will, ” said Professor Steven Cowley, head of the Centre for Fusion Energy. “It will be a Wright Brothers moment.”

How to make a Fusion reactor in Voltz