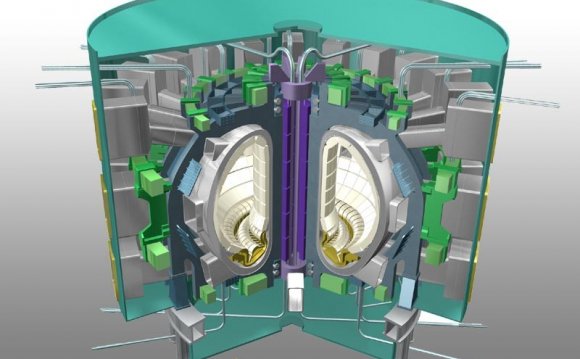 A multibillion-euro project to build the world's largest nuclear fusion reactor will soon have a new chief. Bernard Bigot, who was nominated to be director-general of ITER on 20 November, says that he intends to radically reform the management and governance of the troubled project.

Bigot is currently chairman of the French Alternative Energies and Atomic Energy Commission (CEA), and will succeed Japan's Osamu Motojima, who has been ITER director-general since July 2010. The project's current organization has been harshly criticized, and blamed for overruns in the costs of the reactor, and slips in its construction schedule.

Fusion reactors generate energy using the same underlying process as the Sun, by fusing hydrogen nuclei to make helium. A collaboration between the European Union, China, India, Japan, South Korea, Russia and the United States, ITER is designed to show the feasibility of nuclear fusion as a power source on Earth.

The device, which is under construction at a site in St-Paul-lez-Durance in southern France, will consist of a doughnut-shaped reactor called a tokamak. The current official cost is at least €13 billion (US$16 billion), compared with an initial price tag of €5 billion, but even this later figure is likely to be an underestimate.

The exact cost is difficult to determine. Rather than a single central budget for procuring equipment, member states instead contribute the different parts of the machine in kind, and take responsibility for paying for them in their own currencies. Once built, the reactor is estimated to cost around €280 million to €530 million a year to operate.

At a meeting in February, the ITER Council, which supervises ITER's work, agreed to seek management reforms in response to a scathing external review of the project. The assessment, an executive summary of which, described a litany of problems plaguing the project, including bureaucracy, the lack of a "strong project management culture" and unacceptably slow progress.

In particular, the assessment criticized a "weak” leadership team. The next director-general "must be an inspirational leader and manager", with "strong, industrial large-project management experience", the report said.

Bigot says that he will submit an action plan to the ITER Council before the end of January 2015. This will include a proposal to abolish ITER's current, decentralized structure, in which the central ITER Organization is responsible for the design, construction and operation of the reactor, but has no direct control over each of the member state's ITER agencies.

He wants a single tight organization, with the director-general responsible for controlling the entire project — rather like at a multinational company or at CERN, Europe's particle-physics laboratory near Geneva, Switzerland. "We need global management of ITER, " he says.

The proposed changes will not be politically easy, Bigot acknowledges. However, he says that there was support for his plans at a recent informal meeting with the heads of the domestic ITER agencies.

The time is ripe for change, he adds, because ITER has now moved out of the planning phase and into the construction phase, in which strong leadership is required more than ever — for example, to impose firm delivery schedules on the member states.

After Bigot submits his plan, an ITER Council meeting is expected to be held in February to approve the proposal, and Bigot should be formally appointed immediately after.

However, because Motojima's mandate does not end until July 2015, there will be a "transitional period", says Bigot. This unprecedented early arrival of a new director-general is a signal that the council is serious about accelerating reforms, says one ITER official, who requested anonymity.

Bigot believes that his past experience will hold him in good stead. He was appointed chairman of the CEA, an agency of more than 16, 000 scientists, engineers and technicians, in 2009, and has been France's high commissioner for atomic energy since 2003. He has also held a variety of other senior positions, including a stint as director-general of research and technology at the French science ministry.

And Bigot has already worked frequently with ITER officials in the member states. "I'm used to speaking with these people and I believe they trust me, " he says. Niek Lopes Cardozo, a fusion researcher at Eindhoven University of Technology in the Netherlands, says that he hold's Bigot "in the highest regard, both as a professional and as a person".