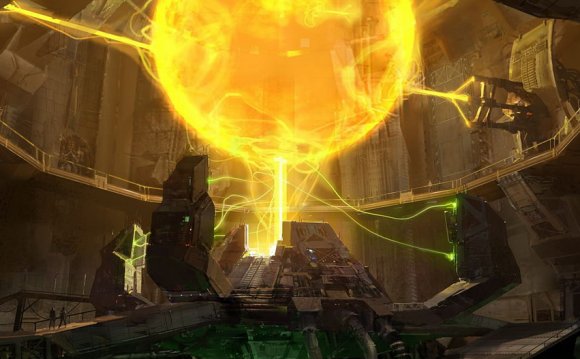 If “The Stellarator” sounds like an energy source of comic book legend to you, you’re not that far off. It’s the largest nuclear fusion reactor in the world, and it’s set to turn on later this month.

Housed at the Max Planck Institute in Germany, the Wendelstein 7-X (W7-X) stellarator looks more like a psychotic giant’s art project than the future of energy. Especially when you compare it with the reactor’s symmetrical, donut-shaped cousin, the tokamak. But stellarators and tokamaks work according to similar principles: In both cases, coiled superconductors are used to create a powerful magnetic cage, which serves to contain a gas as it’s heated to the ungodly temperatures needed for hydrogen atoms to fuse.

Stellarators are ridiculously hard to build, a fact which should be self-evident after one glance at the W7-X. Its 16 meter-wide ring is bristling with devices and cables of all shapes and sizes, including 250 access ports. The guts of the beast are no less chaotic: Fifty 6-ton magnetic coils, twisted and contorted like clocks in a Dalí. By comparison, the tokamak is an engineer’s dream.

But complexity aside, stellarators have certain qualities that make them better suited for commercial applications. Tokamaks can only be turned on for short bursts, and they’re prone to magnetic disruptions that can destabilize the entire reactor. As Science News explains in a great long-read on fusion, differences in how the magnetic fields are imposed render stellarators immune to these issues.

It took 19 full years to build W7-X. By the end of the month, approval to turn the reactor on is expected to come from Germany’s nuclear regulators. If all goes well and the stellarator is able to hold onto its heat, this crazy device could steer a new course for fusion power. Humanity’s energy future: Solar panels, wind turbines, and 300-ton miniature star cores that look like giant katamari. I kinda like it.