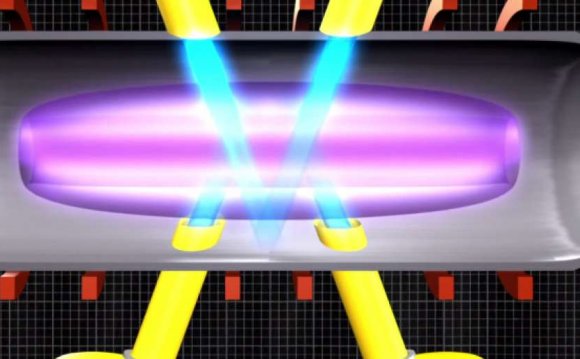 The largest military contractor in the United States is developing a nuclear fusion reactor that is small enough to fit on the back of a truck but has the ability to produce the energy required to power a warship.

Lockheed Martin said in a statement released on Wednesday this week that its secretive Skunk Works division — the unit responsible for the U-2 spy plane and F-117 stealth jet — has already applied for several patents related to the high-tech reactor it has in the works, and expects it to be deployed during the next decade if interested industry and government partners sign on to help starting soon.

“Our compact fusion concept combines several alternative magnetic confinement approaches, taking the best parts of each, and offers a 90 percent size reduction over previous concepts, ” Tom McGuire, the compact fusion lead for the Skunk Works’ Revolutionary Technology Programs, said in a statement. “The smaller size will allow us to design, build and test the CFR in less than a year.”

According to an article published by Reuters on Wednesday, McGuire told reporters that Skunk Works has already successfully shown the company can build a 100-megawatt reactor that measures seven by 10 feet, or around 10 times smaller than what is currently available. Next, the Lockheed division wants to have a prototype ready within five years and then, within ten years, have the unit ready to be deployed.

“A small reactor could power a US Navy warship, ” Andrea Shalal wrote for Reuters, “and eliminate the need for other fuel sources that pose logistical challenges.”

The energy created through nuclear fusion can be up to four-times more powerful that the energy released by fission, Lockheed claims on its website, and a small-enough reactor like the one being developed now by Skunk Works could provide enough power for a town of 100, 000 people, according to the contractor.

“To mimic the energy created by the sun and control it here on earth, we’re creating a concept that can be contained using a magnetic bottle. The bottle is able to handle extremely hot temperatures, reaching hundreds of millions of degrees. By containing this reaction, we can release it in a controlled fashion to create energy we can use, ” Lockheed explains on its own site. “The heat energy created using this compact fusion reactor will drive turbine generators by replacing the combustion chambers with simple heat exchangers. In turn, the turbines will then generate electricity or the propulsive power for a number of applications.”

If successful, Lockheed’s latest effort “could change civilization as we know it, ” Gizmodo predicted on Wednesday, by giving the world a portable power source unlike anything already available.

“It’s one of the reasons we think it is feasible for development and future economics, ” Skunk Work’s McGuire told Aviation Week recently with regards to the reactor’s size. “Ten times smaller is the key. But on the physics side, it still has to work, and one of the reasons we think our physics will work is that we’ve been able to make an inherently stable configuration.”

How to Make A Fusion Reactor