What is the Science Behind nuclear Energy? 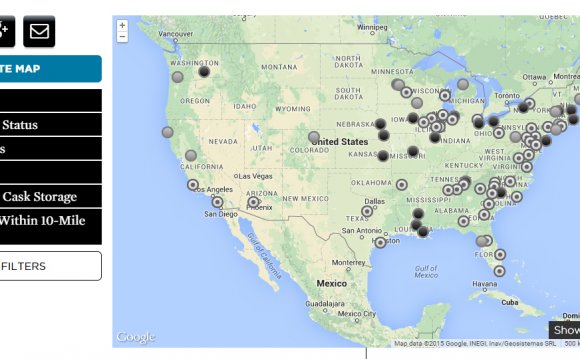 Atoms are constructed like miniature solar systems. At the center of the atom is the nucleus; orbiting around it are electrons.

The nucleus is composed of protons and neutrons, very densely packed together. Hydrogen, the lightest element, has one proton; the heaviest natural element, uranium, has 92 protons.

The nucleus of an atom is held together with great force, the "strongest force in nature." When bombarded with a neutron, it can be split apart, a process called fission (pictured to the right). Because uranium atoms are so large, the atomic force that binds it together is relatively weak, making uranium good for fission.

In nuclear power plants, neutrons collide with uranium atoms, splitting them. This split releases neutrons from the uranium that in turn collide with other atoms, causing a chain reaction. This chain reaction is controlled with "control rods" that absorb neutrons.

In the core of nuclear reactors, the fission of uranium atoms releases energy that heats water to about 520 degrees Farenheit. This hot water is then used to spin turbines that are connected to generators, producing electricity.

Uranium is one of the least plentiful minerals—making up only two parts per million in the earth's crust—but because of its radioactivity it is a plentiful supply of energy. One pound of uranium has as much energy as three million pounds of coal.

Radioactive elements gradually decay, losing their radioactivity. The time it takes to lose half of its radioactivity is called a "half life." U-238, the most common form of uranium, has a half life of 4.5 billion years.

U-235, used for energy production and pictured to the left, has a half life of 713 million years. As uranium decays in nature, it turns into lead.

Uranium is found in a number of geological formations, as well as sea water. To be mined as a fuel, however, it must be sufficiently concentrated, making up at least one hundred parts per million (0.01 percent) of the rock it is in.

In the U.S., uranium is mined from sandstone deposits in the same regions as coal. Wyoming and the Four Corners region produce most U.S. uranium.

The mining process is similar to coal mining, with both open pit and underground mines. It produces similar environmental impacts, with the added hazard that uranium mine tailings are radioactive. Groundwater can be polluted not only from the heavy metals present in mine waste, but also from the traces of radioactive uranium still left in the waste. Half of the people employed by the uranium mining industry work on cleaning up the mines after use.

The Department of Energy estimates that the U.S. has proven uranium reserves of at least 300 million pounds, primarily in New Mexico, Texas, and Wyoming. American power plants are using over 40 million pounds of uranium fuel each year. Much more uranium is likely to be available beyond our proven reserves.

Uranium comes in two forms, U-235 and U-238. As found in nature, uranium is more than 99 percent U-238; unfortunately, U-235 is what is used in power plants. U-238 can also be processed into plutonium, which is also fissionable.

The pellets are then packed into 12-foot long rods, called fuel rods. The rods are bundled together into fuel assemblies, ready to be used in the core of a reactor.

As of 2012, over 80% of uranium purchased by civilian nuclear reactors was imported to the U.S., not mined domestically, creating a trade deficit. Main suppliers include Russia, Canada, Australia, Kazakhstan, and Namibia.

Most of the plants in operation are "light water" reactors, meaning they use normal water in the core of the reactor. Different reactor technologies are in use abroad, such as the "heavy water" reactors in Canada. U.S. reactors account for more than one-fourth of nuclear power capacity in the world.

Energy & Electricity in Science : How Is Nuclear Energy ...