Definition of states of matter 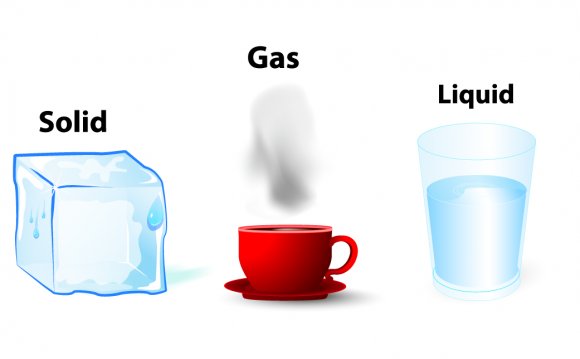 This video is from the Chemistry Comes Alive! series and is used with permission from the Division of Chemical Education of the American Chemical Society.

Why do you think freezing water in the metal container caused it to burst? Water molecules move further apart when water freezes. This movement caused the metal container to burst. Why are roads likely to develop potholes during cold winters? Hint: Think about what happened to the metal container. When water gets in small cracks in the road and freezes it expands and breaks the asphalt. When this continues to happen below the surface, it eventually forms a pothole. What do you think happens to water molecules when liquid water changes to solid ice? Students learned that when water vapor is cooled, attractions between water molecules cause them to condense and become liquid water. Students may say that the water molecules slow down enough that their attractions hold them together as ice.

Note: Students may say that water molecules get closer together to form ice. Water is unusual because its molecules move further apart when it freezes. The molecules of just about every other substance move closer together when they freeze. This will be covered in more detail in Chapter 3, Density.

How can you make the water vapor in air condense and then freeze?

Materials for each group

Use pliers to bend sharp edges on the can down. Then cover the rim with 2–3 layers of duct tape to prevent possible injuries.

Note: After completing Step 5, you may choose to have students place a thermometer inside the can. The temperature of the salt and ice mixture will be below the normal freezing point of water, which is 0 °C.

A thin layer of ice will appear on the outside of the can. Students may also see liquid water on the upper part of the can where it isn’t as cold.

Discuss student observations and ask how the attractions and motion of molecules can explain the changes in state.

Look at and touch the outside of the can. What do you observe? A thin layer of ice covers the coldest part of the can. Some small drops of water may appear higher on the can where it is not as cold. Describe what happens to water molecules as they move from being water vapor near the can to ice on the can. Water vapor molecules in the air near the can cooled when energy from the air transferred to the cold can. These water molecules slowed down, condensed to liquid water, and then froze to become ice. Your can might have some water and some ice on the outside of it. Explain how this is possible. Tiny drops of water appear on the part of the can above the ice because the molecules slow down and condense to liquid water. Ice appears on the colder part of the can because the water vapor that came in contact with this part of the can was cooled so much that it froze.

Give students time to answer questions about the activity and the animations.

Point out that when water freezes, the water molecules have slowed down enough that their attractions arrange them into fixed positions. Water molecules freeze in a hexagonal pattern and the molecules are further apart than they were in liquid water.

Note: The molecules in ice would be vibrating. The vibrations are not shown here but are shown on the next animation.

Explain that this animation shows different views of the ice crystal. Point out that even though the ice is cold the molecules still have motion. They vibrate but cannot move past one another.

Have students compare molecular models of liquid water and ice.

The molecules in liquid water are closer together than they are in ice. Compared to other substances, water is unusual in this way. The molecules in the liquid are moving past one another. The hydrogen end of one water molecule is attracted to the oxygen end of another but only for a short time because they are moving.

Have each group arrange their water molecules into a six-sided ring of ice.

Students do not need to orient the molecules exactly as they are in the space-filling model but they should try to have a hydrogen atom of one molecule near an oxygen atom of another. Ask students to handle their models gently because they will need them for other lessons.

Table 1. Freezing points for water, corn oil, and isopropyl alcohol. Why do you think different liquids have different freezing points? Help students realize that each liquid is made up of different molecules. The molecules of a liquid are attracted to each other by different amounts. The molecules have to slow down to different levels before their attractions can take hold and organize them into fixed positions as a solid.

Have students consider the freezing point of a gas.

Tell students that the air around them is made of different kinds of gases. The attractions between the molecules of gases in air (except water vapor) are so weak that they need to be cooled to very low temperatures in order to condense to a liquid or freeze to a solid.

Nitrogen gas makes up about 80% of the air. If nitrogen is made cold enough, the weak attractions between its molecules can cause it to condense to a liquid. Nitrogen condenses to a liquid at −196 °C and it freezes at −210 °C.

Show some pictures of frost and introduce how substances can sometimes change directly from a gas to a solid.

Tell students that under some conditions a gas can turn directly to a solid without going through the liquid phase. Explain that this process is called deposition. Some of the ice that formed on the outside of the can may have been a result of deposition.