Name the four states of matter 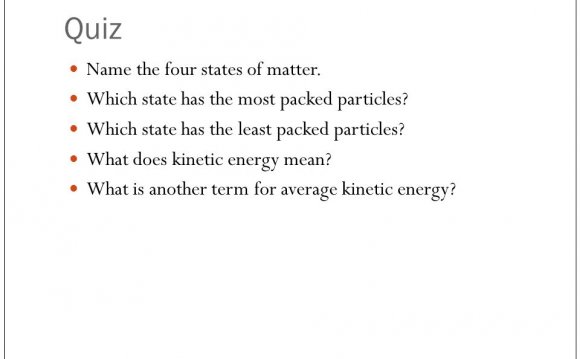 The Four Elements are, by definition, fundamental to many forms of Paganism, and particularly Wicca. In the modern world however, I find it difficult to reconcile the four classical elements of Earth, Air, Fire and Water with the 100 or so scientific elements — how can I refer to the four elements that make up our world when I know that the reality is far more complex?

Earth = Solid
The Solid state of matter is the state that we usually feel most familiar with; most solid items can be seen, touched and represented easily. It is the state in which particles are the lowest energy, but most highly ordered. Solids are strong and stable, holding their shape; the word “solid” as an adjective has connotations of reliability, durability and truthfulness. When forced to change, solids break rather than change shape.

When working with the energies of Earth, we should think of these qualities — strong, stable, safe and orderly, but also inflexible, heavy, cold and low in energy.

Water = Liquid
Liquid is the second state of matter. Its particles have a little more energy than a Solid, so they can slide over each other. This gives liquid its ability to take the shape of any container that holds it, and to flow.

As a liquid itself, Water exhibits these qualities. Water energy is slightly higher than a solid, and can be considered more versatile, but it is still fairly self-contained as well as being cold and heavy.

Air = Gas
Heat a liquid enough, and it’ll evapourate into gas. Gas is a highly energised state of matter; the particles have all broken free of each other and move in random directions. As a result, gas is formless and often invisible. It therefore exudes a lot of mystery for humans.

Air, the mix of nitrogen and oxygen that we are so familiar with and depend upon, is the element attributed with qualities of lightness, energy and warm. It’s also associated with intellect and intuition — perhaps because gases are generally invisible, just like human thought; we often tend to say things like “a thought came out of the air.” Being so formless, Air is also associated with freedom.

When a gas is heated to extreme temperatures, the very atoms themselves are ripped apart, the electrons breaking free from protons to become free-flowing. Plasmas in nature can be found in lightning, stars and some kinds of flame.

Although most flames aren’t really plasma (they are reacting gases), the element of Fire certainly has many of the qualities of a plasma: extreme energy and heat, a strong connection with light, chaotic behaviour, weightlessness, and destructiveness. That’s why working with Fire energy requires caution — it is extremely powerful, but can be dangerous! The word “plasma” often makes us think of futuristic, space-age techology, and this can be carried across to Fire energy — use it when invoking something new and revolutionary.

Many traditions include a fifth element, often called Aether or Void or Spirit, which is the most mysterious element of all. It’s either considered an “everythingness, ” pervasive force throughout all the other elements, or a “nothingness, ” devoid of anything at all, or somehow a combination of the two.

I equate the fifth element with Spacetime, the “structure” of existence itself which results in gravity, in which quantum foam, a seething sea of potential at the most subatomic scale possible in which virtual particles exist for almost no time before disappearing. It’s the ultimate “everything in nothingness, ” equating very well to the idea of the aether.

Although I’ve been interested in Paganism for many, many years, I have only recently started practising Paganism on a regular basis. As suggested in Scott Cunningham’s Wicca: A Guide for the Solitary Practitioner, I’ve decided to start a “Mirror Book;” a journal of my progress and thoughts in discovering my own spiritual path. You can read this progress online at The Mirror Book.

The 4 States of Matter of Nitrogen, All at the exact same ...

Changes in the States of Matter by Infotopia