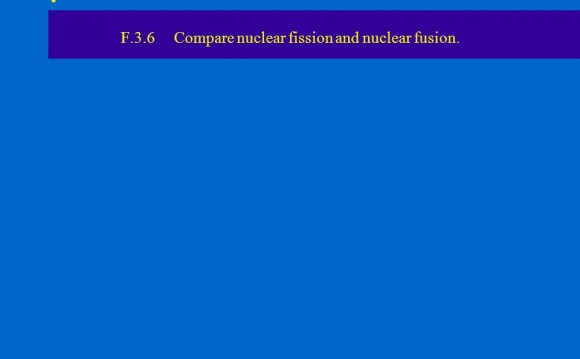 Nuclear energy must be a consideration for the future with the rapidly depleting supply of fossil fuels. This type of energy can be created through nuclear fission and nuclear fusion. Nuclear fission is the splitting of a heavy atom into two or more parts, releasing huge amounts of energy. The release of energy can be controlled and captured for generating electricity. Nuclear fusion involves bombarding hydrogen atoms together to form helium. In the long run, nuclear fusion has greater potential than fission.

Cost and availability of fuel is a considerable factor when dealing with nuclear power. Fission requires an element that can be easily split in a particle accelerator, such as uranium or plutonium. Fusion, on the other hand, uses isotopes of hydrogen atoms, specifically deuterium and tritium, that can be obtained from ordinary water. Uranium ores occur naturally in many parts of the world but must go through a costly purification process before used as fuel. The unprocessed ore contains approximately 99.3% uranium-238, a non-fissionable isotope of uranium, and only about 0.7% of U-235 required for fission. One hydrogen atom out of 6700 appears as deuterium, a naturally occurring isotope of hydrogen with an extra neutron, and can easily be separated from the rest. Uranium-235 is a non-renewable resource that will eventually run out, much like the fossil fuels. The abundance of deuterium and lithium provide a virtually unlimited supply of fuel for nuclear fusion. Therefore, nuclear fusion seems to be the better choice.

Second, the potential amount of energy produced by fusion can greatly outweigh the fission. Initially, there are some disadvantages to fusion. The time and money required to develop technology needed to initiate, contain, and sustain a profitable fusion reaction is costly, but the development is still in its early stages and will continue to advance through the next century. Fission readily creates a chain reaction which must be slowed through use of a moderator to avoid core meltdown, while fusion can only be accomplished at temperatures similar to the centre of stars, about 100 million degrees celsius. The components used in fusion exist in the form of plasma where atoms are divided into electrons and nuclei. No solid material known to man can withstand temperatures necessary for nuclear fusion, but several methods of containment are being researched, magnetic confinement and inertial confinement. Until recently, all fusion devices developed have used much more energy than produced, but the latest designs have been able to generate an equal amount of energy to that required to sustain the reaction. Finally, fusion of a given mass of deuterium will be able to create over four times the energy produced through fission of an equal mass of uranium. It is just a matter of time and development before useful amounts of electricity can be produced through fusion.