Definition of fusion and fission 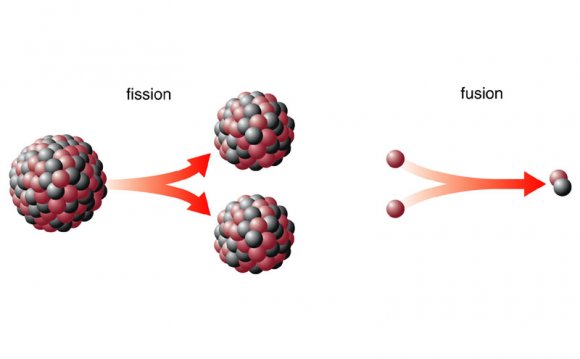 The energy harnessed in nuclei is released in nuclear reactions. Fission is the splitting of a heavy nucleus into lighter nuclei and fusion is the combining of nuclei to form a bigger and heavier nucleus. The consequence of fission or fusion is the absorption or release of energy.

Protons and neutrons make up a nucleus, which is the foundation of nuclear science. Fission and fusion involves the dispersal and combination of elemental nucleus and isotopes, and part of nuclear science is to understand the process behind this phenomenon. Adding up the individual masses of each of these subatomic particles of any given element will always give you a greater mass than the mass of the nucleus as a whole. The missing idea in this observation is the concept called nuclear binding energy. Nuclear binding energy is the energy required to keep the protons and neutrons of a nucleus intact, and the energy that is released during a nuclear fission or fusion is nuclear power. There are some things to consider however. The mass of an element's nucleus as a whole is less than the total mass of its individual protons and neutrons.

To calculate the energy released during mass destruction in both nuclear fission and fusion, we use Einstein’s equation that equates energy and mass: