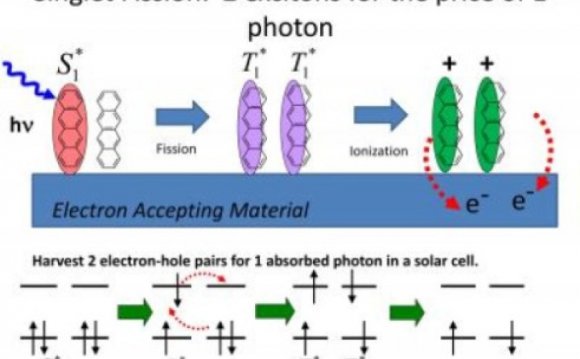 Chemists at the University of California Riverside (UCR) have devised a way of increasing solar cell efficiency by as much as 30%. With current photovoltaic cells unable to surpass 33% due to the Shockley-Queisser limit, a boost of 30%, to a total efficiency of 60% or more, would be absolutely huge — and exactly what solar power needs if it ever hopes to be a cost-efficient alternative to fossil fuel power generation. Best of all, though, this new method for boosting solar cell efficiency has an awesome name: singlet fission.

Currently, the Shockley-Queisser limit states that a single photon can only create a singlet (single) exciton, with any extra energy dissipated as heat. Without getting into the physics of it, this results in a max efficiency of just 33%.

Now, however, four chemists at UCR have found a way of turning a single photon into two excitons, by a process known as singlet fission. As the name implies, singlet fission is a process by which a single exciton splits into two triplet excitons. (I’m not sure why they’re called triplets, because there’s only two of them, but I’m not going to argue with four guys who have a lot more letters after their names than me.) The researchers don’t yet understand the exact mechanism for singlet fission, but it seems to occur more readily in semiconductors with multiple, spaced-out bandgaps.

By doubling the yield of excitons in a solar cell, you theoretically double the number of electrons produced. Suddenly, instead of having a max theoretical efficiency of 33%, you’re up t0 60% or more. [DOI: 10.1021/jz500676c – “Singlet Fission: From Coherences to Kinetics”]