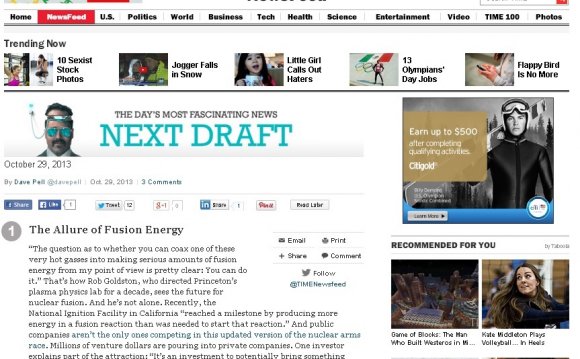 Can we harness the energy of an earth-bound sun? It's a question that has obsessed and perplexed scientists for more than half a century. According to Professor Steve Cowley, director of the Culham Centre for Fusion Energy (CCFE) and chief executive of the United Kingdom Atomic Energy Authority, it remains one of the "great quests" in science.

For the uninitiated, it's the kind of big idea that makes your head spin: we're talking about mimicking the process that powers the stars, heating hydrogen atoms to temperatures in excess of 100 million degrees celsius – the point at which they fuse into heavier helium atoms – and releasing energy in the process.

The creation of a self-sustaining reaction here on earth would be a revolutionary moment for humanity. It would mean we'd have a near-limitless source of energy that is clean, safe and cheap. The fuel used for fusion (two isotopes of hydrogen, deuterium and tritium) is so abundant it will effectively never run out; one kilogram of it provides the same amount of energy as 10 million kilograms of fossil fuel.

And while some fusion reactor components would become mildly radioactive over time, they should be safe to recycle or dispose of conventionally within 100 years, according to fusion experts.

Although the science underpinning fusion research is solid, the amount of energy these reactions produce has yet to exceed the amount needed to instigate them. Breaking through this barrier and achieving a self-sustaining reaction (a process known as ignition) is the holy grail of fusion research.

Some scientists say we'll never reach this point, that fusion power is nothing but an expensive pipe dream. Their scepticism is partly due to the overly optimistic attitude of scientists in the 1950s who, having cracked open atoms, thought they'd also be able to fuse them together in a similar timeframe, with commercial fusion reactors on the grid by the 1970s. But the 70s came and went and today, by most estimates, we're still another 40 or 50 years away from fusion power.

A team at the US defence-funded National Ignition Facility (Nif), in California, are working on the laser method. By firing 192 lasers at a fuel pellet the size of a pinhead, and compressing it 35 times to produce the pressure and heat needed to start a fusion reaction, the scientists succeeded in producing slightly more energy than the fuel absorbed from the lasers – a breakthrough after years of setbacks and slipped timescales.

However, the 17 kJ of energy released during the reaction is equalivalent to around 1.5% of the energy contained in a Mars bar and the reactor itself still needs much more energy to operate than it produces. Nevertheless, many hailed this finding as a significant step.

Magnetic confinement fusion, arguably the more advanced strand of research, is the basis of the Joint European Torus (Jet) experiment, situated at CCFE. In 1997, the Jet team achieved a major breakthrough, generating a world record 16MW of fusion power. But, says Cowley, the lack of political interest in climate change relative to today meant their achievement didn't get the attention it deserved – something he hopes to rectify in 2017, when the team will attempt to break their previous record in a new series of tests.

Jet's ring-shaped 'tokamak' magnetic confinement chamber design is also at the heart of the International Thermonuclear Experimental Reactor (Iter), a £13bn project which aims to demonstrate that fusion can work at a power plant scale. Construction of the reactor is underway in the south of France, albeit two years behind schedule. A truly international effort, Iter involves 35 nations, many of which are building complex components that are then shipped to France for assembly. Once completed Iter is expected to release 500 MW of power from a 50MW input and, as many hope, might even achieve ignition.

"When Iter gets to self-sustainment that will be one of those moments in science that happen very rarely, " says Cowley. "I think we will then be able to say it's completely scientifically possible to make a commercial fusion reactor. The real question then is cost and scale."

Iter has been beset by delays, funding issues and political and administrative problems. As head of communications Michel Claessens says: "The main challenge for the project is not the science and technology itself, but the management as a whole, the way these 35 countries cooperate."

If Iter proves successful in its aims, a prototype commercial reactor will likely be put into production. Ultimately, it could take an Apollo-style push to overcome the barriers to commercialisation of fusion power – something that is more likely to happen if Iter achieves ignition.

But will the political and economic hurdles derail the scientists' work before it can bear fruit? "It can't possibly be that we've got this close and we can't see it through to the end, " says Cowley. "Once this problem is cracked, we'll have it [fusion energy] forever. It's just taking a long time to get there."

Nuclear Fusion for Clean Energy in the Future

Nuclear Fusion: energy of the future