Most common states of matter 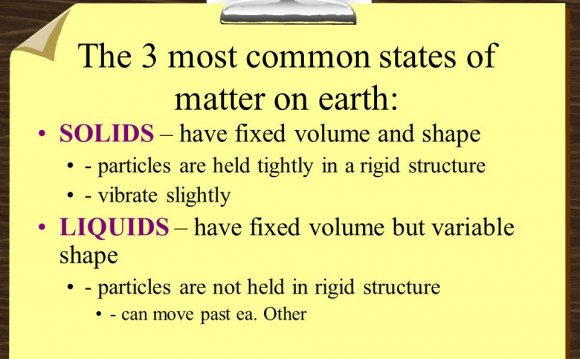 A change in the state of matter indicates a change in structure as well as arrangement of particles, which can be recognized by an abrupt change in properties.

Out of the three states of matter, solids are more common than liquid and gas. The main point in which a solid differs from the other two states is the fact that gases and liquid possess fluidity i.e. they can flow and are described as being fluid, while solids do not possess fluidity; instead they are rigid in nature.
The rigidity of solids is due to the presence of strong intermolecular force between their constituent particles. Hence particles are not free to move and they oscillate at their fixed positions only. Because of rigidity, solids have a definite shape and volume. Hence solid can be defined as the state of matter which possesses rigidity, definite shape and definite volume. For example; A bar of steel, Wood block.

Due to this regular arrangement in crystalline solids, they are hard in nature with a sharp melting point and boiling point, while amorphous solids melt over a range of temperatures. For example, any metal is an example of crystalline solid while silica, glass, plastic, rubber are examples of amorphous us solids.

They have some extent of freedom of motion, because of which they have a definite volume but no definite shape. Liquid state is much less compressible and far denser than a gas. The intermolecular force of attraction is only temporary in liquid state which allows it to move freely resulting in a limited degree of particle mobility.

Only two elements are found in the liquid state: mercury and bromine. Other elements like cesium, gallium, rubidium and francium also exist in the liquid state but above room temperature. Many organic and inorganic compounds can exist in liquid state. All liquids show some characteristic physical properties like vapor pressure, surface tension, viscosity and refraction.

The main difference between gas and other states is that gas molecules move around much more. The random movement of constituent particles in gaseous state is due to negligible intermolecular force of attraction. Due to this, intermolecular distance between molecules is very high. They do not have definite volume or shape. Due to very large intermolecular distance, gaseous state is highly compressible and easily compressed at high pressure for transportation.Because of the random motion of particles, they exerted force on per unit area of the wall of container. There is continues collision between the molecules of gaseous particles which make gaseous reactant more reactive than solid and liquid reactants under normal conditions of temperature and pressure. Gaseous state shows some incredible properties like low density and viscosity due to negligible intermolecular force of attraction.Compared to solid and liquid state, the effect of change in pressure and temperature is more on gaseous particles within a certain volume. Due to random motion in particles, gaseous state shows diffusion throughout any container.

It’s very difficult to handle gas as it has the tendency of diffusion and will easily leak out. That is the reason it’s difficult to weigh any gas. The most common example of gas is air which is a mixture of different gases, mainly nitrogen, oxygen and carbon dioxide with a trace amount of other gases and solid particles.

Hence the overall representation of three states of matter; solid, liquid and gaseous is as follows.
All these states of matter can be transformed into each other by applying a certain amount of temperature and pressure.