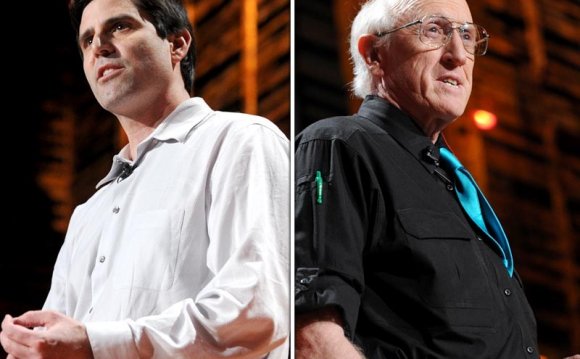 An artist's conception of what the right half of the DIII-D tokamak looks like when energized with plasma.

Fusion-fueled power generation has been the energy of the future for several decades.

"There's always been this sense that fusion is fifty years away, " Saskia Mordijck says, but she adds that the horizon for safer and more efficient fusion-based electricity in our homes is really, truly getting closer.

Mordijck, a research assistant professor based in the Computer Science Department at William & Mary (with adjunct positions in physics and applied science), has received funding from the U.S. Department of Energy to continue her investigation of fusion energy. She says most people are only vaguely aware of how fusion works and therefore have little idea of the advantages is offers over "traditional" nuclear power.

To accomplish fusion, she says, you take two very small particles and heat them at high enough temperatures so that they fuse together. "As a result of their fusing together they actually will release energy, " Mordijck explained. "This is all in Einstein's famous equation E=mc2. That's one most people recognize even if they have not had any physics."

Many advantages over fission

When it comes to power generation, fusion has a number of advantages over fission and many of them relate to safety. Mordijck says that the usual causes of anxiety over nuclear power generation just don't exist with fusion. Fukushima/Chernobyl-type incidents are not part of the equation.

The second set of fusion-over-fission benefits centers around radioactive waste. Mordijck acknowledges that certain amount of waste is inescapable, but a fusion power plant would generate only a fraction of the amount of nuclear waste that even the most efficient fission plants produce. Not only is the amount smaller, but waste from a fusion plant also stays dangerous for much shorter periods of time.

"In a fission power plant we create a lot of radioactive waste which lasts for a very long time. It lasts longer than most things that we have here on Earth, and so we have to store it somewhere. We cannot clean it any way or form, " Mordijck explained. "Whereas in a fusion power plant, the lifetime of this waste is very short. After 50 to 100 years, it will be completely gone and it will not be more radioactive than the surrounding environment and it won't be able to contaminate anything."

Fusion energy has been working in the sun, where the fusion of hydrogen nuclei into helium has been keeping us warm for years. Despite all the potential advantages, fusion remains an experimental technology and an underfunded one at that, Mordijck says.

"When people say that fusion always seems to be perpetually fifty years off, we fusion scientists point out that our funding has been cut every single year, so it's hard to make any progress, " she noted.

Mordijck says that to get fusion past the experimental stage, she and her fellow scientists must solve several problems—scientific and engineering. One of the knottiest sets of problems involves thermal transfer. The challenges begin with the necessity of having something very hot next to something very cold.

"So, imagine you're heating something to temperatures that are hotter than the sun, but two or three feet away you need super-cooling magnets, " she said. The high temperatures are necessary to induce fusion and the magnets are needed to contain the product of the fusion, a state of matter known as plasma.

Once fusion is achieved, the problem becomes how to get the energy out of the plasma. Both coal-fired and fission power plants use the heat generated to boil water to spin turbine blades. Fusion, generating temperatures beyond the sun's, offers a problem of too much heat too quickly for most materials to handle.

Mordjick's own research focuses on containing the plasma by using magnetic fields. She explains that solar plasma is contained by the sun's massive gravity.

"But we can't create a sun here on earth, " she says, "so we do it through magnetic fields. But the plasma has a tendency to leak out, so you lose particles. I've been working on how you lose those particles."

Fusion-control experiments are most often conducted in instruments known as tokamaks. A tokamak is a chamber shaped like a donut, designed to accommodate the magnetic fields needed to contain the plasma. Mordijck has worked extensively with the General Atomics DIII-D tokamak in San Diego. She notes that DIII-D is one of the leading tokamaks in the world, but said that newer and more advanced machines are being constructed in well-funded Asian programs.

Among physicists, the movement of particles is known as "transport, " and Mordijck would say that she studies "perturbative transport" to investigate the loss of particles that are supposed to be confined by the magnetic fields of a tokamak. It boils down to an attempt to measure a phenomenon that is essentially immeasurable.

"It is impossible to measure transport, " she explains. "So you have to kind of infer it."

She said that she can't even distinguish between the two types of transport—convective and diffusive—when she prepares computational models of particle loss, let alone in the control room of a tokamak. This is where the "perturbative" part comes in. Mordijck designs her experiments to introduce a new element, such as a gas puff, into the fusion experiment.

"We add more gas to the experiment, but we do it in very short bursts with some time in between, " she says."

The gas penetrates the plasma quickly and comes out slowly. Mordijck monitors the gas and says the perturbative effect of the gas on the plasma gives her insight into the particle transport.

"From the changes you can see in the measurements, you can infer the convective and the diffusive values, " she explains.