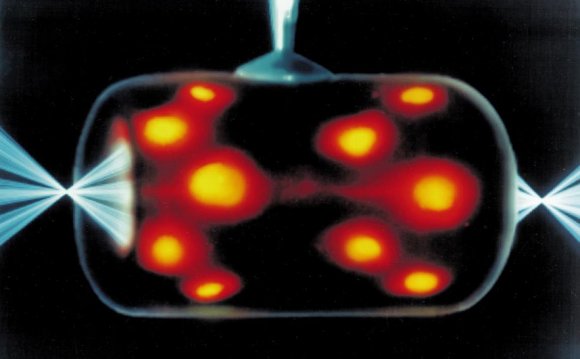 The research was led by scientists at MIT’s Plasma Science and Fusion Center, in collaboration with the University of California at San Diego, General Atomics, and the Princeton Plasma Physics Laboratory.

To make nuclear fusion work, atoms of deuterium need to be “stuck together” to form helium in a super-heated plasma at around 100 million degrees Celsius. Keeping the temperature this high is difficult, though, because turbulence stirs up the plasma, causing heat to dissipate – hence, heat loss.

Attempts to model how this turbulence works have previously failed, earning it the moniker of “the great unsolved problem” in nuclear fusion. But in this latest research, the scientists successfully used a supercomputer to model how turbulence affects the plasma in a tokamak, an experimental type of nuclear fusion reactor.

Their surprising findings were that there are two forms of turbulence – one at the electron-scale and one 60 times larger at the ion level. This can account for the discrepancy between theoretical models and actual experiments. A second paper from MIT graduate student Ruiz Ruiz found direct evidence of electron-scale turbulence.

Above is a video from MIT explaining the findings. YouTube

“The evidence from both of these papers, that electron energy transport in tokamaks has a significant contribution from both ion and electron-scale turbulence and that multiscale simulations are needed to predict the transport, is profoundly important, ” Gary Staebler, a researcher at General Atomics who was not involved in this work, told MIT News.

Scientists thought previously that ion-scale turbulence would far outstrip that at the electron-scale, but the research suggests they interact strongly. It’s hoped the findings could lead to improved simulations that could bring us closer to a true nuclear fusion reactor.

It’s the latest in a series of promising nuclear fusion news, including the “first plasma” from the Wendelstein 7-X reactor, a breakthrough in “fast ignition, ” and continued work on the International Thermonuclear Experimental Reactor (ITER).

Stewart Brand Reports on the Progress of Nuclear Fusion