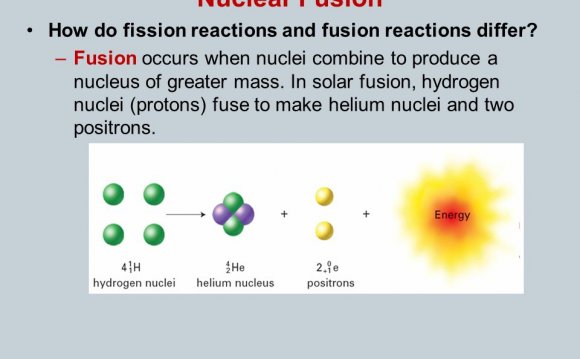 Set your phasers to stunned — we’re about to vaguely go where no man has gone before (soon, anyway).

According to BBC News, scientists at the National Ignition Facility have come one step closer to perfecting the system for harnessing fusion — a potentially unlimited source of energy. Since roughly the 1950s, fusion energy — the source that powers the sun — has been sought by scientists as a viable means of clean and self-sustaining energy. Fusion technology has been incredibly challenging to hone, but in September researchers passed a milestone towards making that breakthrough a reality.

Wait, You’re Losing Me… What is Nuclear Fusion?

According to NuclearFiles.org, nuclear fusion is the joining of two lighter atoms together to produce a heavier atom. This reaction produces more energy than that of nuclear fission, which is the splitting of a heavy, unstable nucleus (like plutonium and uranium) into two lighter nuclei.

So, Nuclear Fission is…. Bad?

Nuclear fission is widely practiced in nuclear power reactors around the world, but the potential hazards of its continued practice has inspired a new advancement in nuclear fusion technology.

OK. So, What Happened, Exactly?

The NIF, based in Livermore, CA conducted an experiment in which 192 laser beams from the world’s most powerful laser were focused through holes in a cylinder container called a hohlraum. During this process, the heat from the lasers is used to compress a pellet of hydrogen fuel to the point where nuclear fusion reactions take place. Scientists told BBC News that after many attempts at manifesting this reaction, in late September the NIF successfully conducted this experiment making it the first time the “amount of energy released through the fusion reaction exceeded the amount of energy being absorbed by the fuel.”

Though the NIF has not yet reached its ultimate goal of “ignition, ” it did state that the experiment was “the single most meaningful step for fusion in recent years.”

Hang on to your phasers, nerds!

RYOT NOTE: The failure of Japan’s Fukushima reactor has drawn attention to the potential perils of nuclear power, making the responsible development of nuclear fusion imperative. Fortunately, the Union of Concerned Scientists has for years worked to educate policy makers and the public about nuclear power. Click the gray box beside this story to learn more about their efforts, consider donating and Become the News!