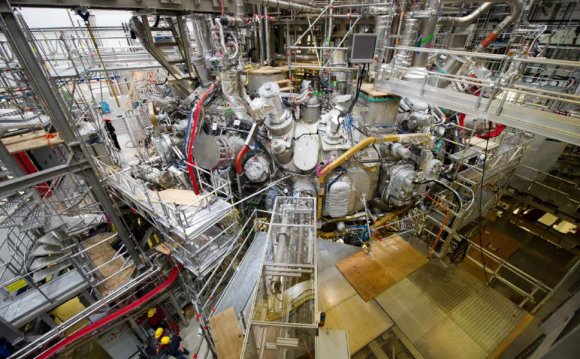 PLAINSBORO, N.J. - Hidden in the woods two miles from Princeton University's main campus sits a drab white building easily mistakable for a warehouse. Inside is one of the Ivy League school's most expensive experiments: a 22-foot-tall metal spheroid surrounded by Crayola-colored magnets. About half a dozen blue beams ring the sphere horizontally, while another set, painted red, rise vertically from the floor to wrap the contraption, like fingers clutching a ball.

Last fall, construction workers hustled to finish an upgrade to yet another magnet, this one jutting through the center of the sphere like a Roman column. On a recent November afternoon, Michael Williams, the lab's head of engineering, weaved his way through workers and up a stainless steel scaffolding to get a better view.

"Fusion is an expensive science, because you're trying to build a sun in a bottle, " Williams said.

This endeavor in the New Jersey woods, known as the National Spherical Torus Experiment, was created to study the physics of plasma, in the hopes that one day humans will be able to harness a new source of energy based on the reactions that power stars. The project has been shut down for two years to undergo an upgrade that will double its power. The improvement costs million, and is paid for - like the rest of the Princeton Plasma Physics Lab - by the U.S. Department of Energy.

Impressive as it may appear, this experiment is small compared to what once stood there. Earlier in the day, while walking over to the site from his office, Williams pointed out a sign on the National Spherical Torus Experiment building that read "TFTR." The abbreviation stands for Tokamak Fusion Test Reactor, a bigger, more promising fusion experiment that was scrapped in the mid-1990s.

"I keep telling them to take that down, " he said.

The history of the U.S. Department of Energy's magnetic fusion program is littered with half-completed experiments and never-realized ideas. Currently, the most ambitious project in all of fusion work is the International Thermonuclear Experimental Reactor, or ITER, a collaborative scientific effort backed by the European Union and six other nations, including the United States. Once it's built in southern France, ITER will be largest fusion reactor ever. The plans for this project dwarf the three similar U.S. fusion experiments, including the one at Princeton, in both scale and expense.

But ITER is sputtering with delayed construction and ballooning costs, and U.S. physicists are increasingly worried that their work at home, such as the National Spherical Torus Experiment, will be sidelined to fund the international project. They see the domestic research as crucial to understanding the nature of the plasma used in certain fusion reactions - crucial, even, to getting facilities like ITER built in the first place. Meanwhile, critics view magnetic fusion research as a money-wasting boondoggle that will never be able to produce energy as cheaply as methods like solar and wind power.

After the visit to the facility, Williams returned to his office and I met with his boss, Stewart Prager, the head of the Princeton lab. Sitting in a tidy glass-paneled office overlooking the woods, he recalled an old joke about fusion - it was "30 years away 30 years ago, and it's 30 years away now" - and explained why the quip has taken hold.

"The true pioneers in the field didn't fully appreciate how hard a scientific problem it would be, " he said.

But then he added: "Even having said that, if you look back at documents from the past, they laid out how much it would cost. That amount of money was never nearly delivered."

The Tokamak Fusion Test Reactor in 1989. (Photo via Princeton)

Fusion scientists make an incredible proposition: We can power our cities, they say, with miniature, vacuum-sealed stars. According to those who study it, the benefits of fusion power, if it ever came to fruition, would be enormous. It requires no carbon drawn from the ground. Its fuel - hydrogen harvested from seawater - is inexhaustible. It emits no gases that warm the planet. And unlike its cousin fission, which is currently used in nuclear power plants, fusion produces little radioactive waste, and what it does produce can be recycled by the reactor.

The only hurdle, as many U.S. physicists tell it, is the billions of dollars needed before the first commercially viable watt of power is produced. Researchers lament the fact that the U.S. hasn't articulated a date for when it hopes to have fusion go online, while China and South Korea have set timetables to put fusion online in the 2040s.

How Close Are We to Nuclear Fusion? | GE Global Research