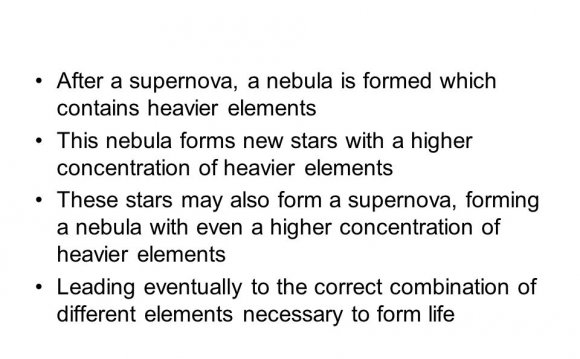 Nuclear fusion involves two atomic nuclei joining to make a large [nucleus: The central part of an atom. It contains protons and neutrons, and has most of the mass of the atom. ]. Energy is released when this happens.

The temperatures and pressures inside a star are so great that nuclear fusion can happen. Stars have enough hydrogen to maintain their energy output for millions of years.

During most of a star's lifetime, hydrogen nuclei fuse together to form helium nuclei. As the star runs out of hydrogen, other fusion reactions take place forming the nuclei of other [element: A substance made of one type of atom only. ]. Heavier elements than hydrogen and helium (up to iron) are formed. Elements heavier than iron are formed in supernova: The explosion of a star as it runs out of nuclear fuel..