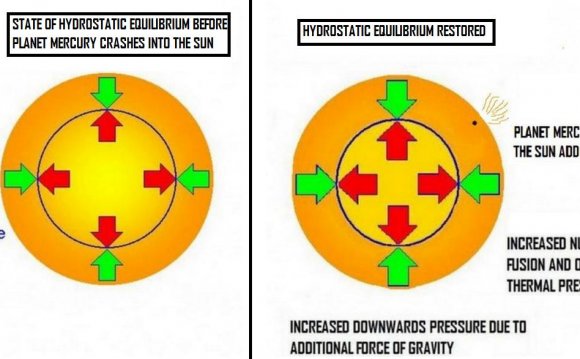 Mike Garrett and NASANuclear fusion containment vessel on the left vs. the sun on the right. Fight!Atoms, the tiny structures that make up you, me, and everything we see on Earth, are mesmerizing in their ability to both create and destroy.

Combine two hydrogen atoms with one oxygen and you get water, the catalyst for life. But combine four hydrogen atoms and you get a burst of energy that can destroy entire islands and did on Nov. 1, 1952. That day the US tested the first hydrogen bomb on the now-nonexistent Pacific island, Elugelab. Below is a before and after image:

The ill-fated island of Elugelab did not survive the power of nuclear fusion.Hydrogen bombs get their power from a process called nuclear fusion. This powerful reaction is happening in the core of the sun right now and is the reason the sun produces radiation in the form heat, light, and higher-energy, carcinogenic particles.

This energy is what gave Earth life. And life is what is currently destroying Earth in its search for energy primarily in the form of coal and oil — which are destroying the atmosphere and raising the Earth's temperature with carbon emissions.

We've been searching for ways to make cleaner power — using the sun's energy, or the wind's, but the cost, infrastructure, and technology have not come close to powering the world. Clean, limitless energy is the real holy grail. Combine that desire with the awesome power we first saw with the H-bomb, and you get an idea of how attractive nuclear fusion really is.

But so far, only Hollywood has managed.

Your browser does not support the video tag. Scene from the 2004 film Spiderman 2. If the fusion process that powers a hydrogen bomb is the same as what would drive a fusion reactor, then why has it been so hard?

The key difference between the two is what we do with all of that energy: The reactor will need to contain the energy released from nuclear fusion, while the bomb goes boom, releasing all of it.

Fusion generates tremendous amounts of energy, but you have to give a lot to get a lot. If any of that energy leaks out without being captured as electricity, it's unlikely that you will get any kind of surplus from your fusion system.

Right now, that's the problem with nuclear reactors on Earth: The amount of energy we need to produce the conditions for nuclear fusion is more than the energy we get out. And we've been coming up short for decades with little signs of improvement, according to Charles Seife, author of the book "Sun in a Bottle: The Strange History of Fusion and the Science of Wishful Thinking who has written about the turtle-paced race for nuclear fusion for Slate.

So, what does the sun have that we don't?

Fusion in the sun's center works by pressing four hydrogen atoms together to form one helium atom and energy. The extreme weight of the sun provides the pressure needed. On Earth, we don't have that kind of weight, and so we must put in a lot of energy to produce nucler fusion reactions.

When this fusion of hydrogen into helium happens, a little bit of the hydrogen atoms' mass is lost in the form of energy. A LOT of energy.

The sun fuses 620 million metric tons of hydrogen in its core each second. If you do the math, that means that in a single second, the sun produces enough energy to power New York City for about 100 years.

Unfortunately for us, it is incredibly difficult to fuse hydrogen atoms together. It takes extreme pressure and heat, something that the sun's strong gravitational force does naturally in its core. But we don't have access to this kind of gravity here on our comparatively tiny Earth, and the only way to manufacture it is to expend a ton of energy to create it.

To scale comparison of the sun and the planets in our solar system.For about the last 70 years, we've slowly developed ways of producing the extreme pressure and heat necessary for nuclear fusion. Today, the most promising methods use containment vessels called tokamaks that can sustain hot plasmas that produce nuclear fusion but require lots of energy and space to function. The other way is using powerful lasers to fuse hydrogen atoms together.

Nuclear Fusion: Engine of the Stars and Energy of the Future