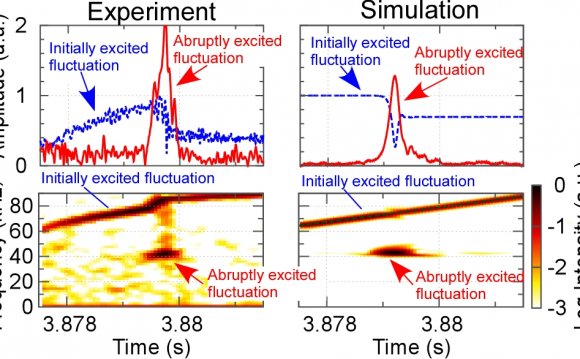 At the National Institutes of Natural Sciences National Institute for Fusion Science, researchers have developed the high-energy heavy ion beam probe, in order to perform potential measurement inside a high-temperature plasma that was generated in the Institute's Large Helical Device (LHD). Engaging in collaborative research with Kyushu University's Research Institute for Applied Mechanics, they have discovered the new phenomenon of abrupt excitation of fluctuations and have clarified the mechanism of this phenomenon. Two successive research papers that summarize these research results were published in Physical Review Letters, the journal of the American Institute of Physics, on January 8, 2016.

Seeking to achieve nuclear fusion, research on the high-temperature plasma of more than 100, 000, 000 degrees Celsius is being conducted around the world. In a magnetically confined plasma, sometimes there abruptly occurs the excitation of fluctuations with large amplitude, which leads to a possible plasma loss. Such a phenomenon influences the performance of the nuclear fusion reactor. Because there is the possibility of damage to the surrounding construction material, clarifying the mechanisms that lead to excitation, predicting excitation, and avoiding excitation are important issues.

On the other hand, in cosmic plasma, too, similar abrupt phenomena occur, and among them the appearance of solar flares is well known. However, in either case, why large events abruptly occur is not well understood. At present, this is an unsolved problem.

The research group of Dr. Takeshi Ido, of the National Institute for Fusion Science, in order to observe the plasma potential inside a high-temperature plasma produced in the LHD and that exceeds one hundred of millions of degrees Celsius, has developed a diagnostic device (the heavy ion beam probe [1]). Using that device, when measuring fluctuations in a plasma, his research group discovered a new phenomenon in which fluctuations typically thought to be stable did grow abruptly, accompanied by a large oscillation amplitude. Examining the experimental data in detail, they achieved the result in which before the excitation of this abrupt fluctuations occurred there was generated a separate fluctuation. That precedent fluctuation triggered the process, and a result which indicates abrupt large amplitude fluctuations had been obtained.

Through collaborative research with the research group of Dr. Sanae-I. Itoh, of Kyushu University's Research Institute for Applied Mechanics, the researchers constructed a new theoretical model for explaining this phenomenon. When they conducted confirmations through numerical simulations they successfully reproduced the experimental results. From this, they were able to discover the heretofore unknown phenomenon of abrupt excitation of fluctuations, to clarify the mechanism, and to predict excitation.

The important points of these research results are that they proved that when the stimulus from outside is beyond a certain level, the physical mechanism exists in a high-temperature plasma that excites abrupt and large amplitude fluctuations, and they clarified the conditions necessary for excitation. Phenomena that possess this type of quality are called subcritical instability.

As an example of the phenomenon in which large amplitude fluctuations abruptly is excited, in a magnetically confinement plasma, there are collapse phenomena such as sawtooth oscillation and disruption which degrades plasma performance, and in cosmic plasma there is the abrupt occurrence of solar flares. The generation mechanisms for these abrupt phenomena are unresolved questions that have long been debated. As candidates for causing these abrupt phenomena, the existence of subcritical instability was indicated theoretically. Through this research, it has been proven for the first time that such an instability exists in geodesic acoustic waves, which are in a plasma, and we successfully predicted the occurrence of this phenomenon. These results are expected to be indicators in addition to advancing our understanding of numerous abrupt phenomena that are widely observed. The abrupt excitation of fluctuations that has been discovered gives indications of the possibility of plasma heating that these fluctuations contribute to. Moreover, research in a confined plasma that can clarify the occurrence mechanism of abrupt phenomena and predict occurrence will contribute greatly to future nuclear fusion research and the development of science and technology, such as avoiding damage to the nuclear fusion reactor and suppressing damage from magnetic storms.

This is a diagnostic device for measuring electric potential and density fluctuations in a high-temperature plasma confined by a magnetic field. When measuring electrical potential in a plasma that exceeds 100, 000, 000 degrees Celsius, we cannot insert a solid measuring probe such as a tester. Thus, instead of a solid, we inject a heavy ion. From the changes in the energy of the heavy ion that passed through the plasma we are able to obtain the electrical potential and simultaneously obtain information regarding plasma density from the change in the number of heavy ions detected.

PLASMA Generation Technology Not to Need a Super High ...