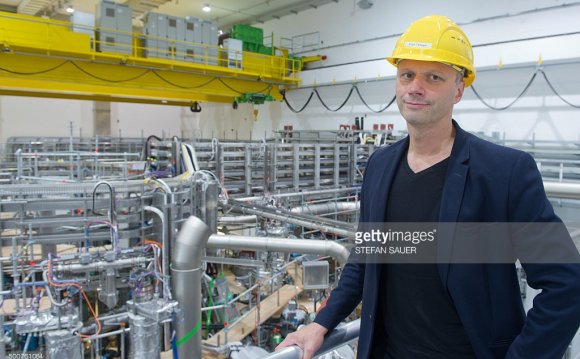 On 10th December 2015 the first helium plasma was produced in the Wendelstein 7-X fusion device at the Max Planck Institute for Plasma Physics (IPP) in Greifswald. After more than a year of technical preparations and tests, experimental operation has now commenced according to plan. Wendelstein 7-X, the world’s largest stellarator-type fusion device, will investigate the suitability of this type of device for a power station. Zoom Image 10th December 2015: The first plasma in Wendelstein 7-X. It consisted of helium and reached a temperature of about one million degrees Celsius. (coloured black-and-white photo)

10th December 2015: The first plasma in Wendelstein 7-X. It consisted of helium and reached a temperature of about one million degrees Celsius. (coloured black-and-white photo)

Following nine years of construction work and more than a million assembly hours, the main assembly of the Wendelstein 7-X was completed in April 2014. The operational preparations have been under way ever since. Each technical system was tested in turn, the vacuum in the vessels, the cooling system, the superconducting coils and the magnetic field they produce, the control system, as well as the heating devices and measuring instruments. On 10th December, the day had arrived: the operating team in the control room started up the magnetic field and initiated the computer-operated experiment control system. It fed around one milligram of helium gas into the evacuated plasma vessel, switched on the microwave heating for a short 1, 3 megawatt pulse – and the first plasma could be observed by the installed cameras and measuring devices. “We’re starting with a plasma produced from the noble gas helium. We’re not changing over to the actual investigation object, a hydrogen plasma, until next year, ” explains project leader Professor Thomas Klinger: “This is because it’s easier to achieve the plasma state with helium. In addition, we can clean the surface of the plasma vessel with helium plasmas.”

The first plasma in the machine had a duration of one tenth of a second and achieved a temperature of around one million degrees. “We’re very satisfied”, concludes Dr. Hans-Stephan Bosch, whose division is responsible for the operation of the Wendelstein 7-X, at the end of the first day of experimentation. “Everything went according to plan.” The next task will be to extend the duration of the plasma discharges and to investigate the best method of producing and heating helium plasmas using microwaves. After a break for New Year, confinement studies will continue in January, which will prepare the way for producing the first plasma from hydrogen.

For comparison: View into the empty plasma vessel, recorded by a black-white-camera installed inside the plasma vessel. These pictures offer higher resolution and the camera is more light-sensitive than a colour camera.

The objective of fusion research is to develop a power source that is friendly to the climate and, similarly to the sun, harvests energy from the fusion of atomic nuclei. As the fusion fire only ignites at temperatures of more than 100 million degrees, the fuel – a thin hydrogen plasma – must not come into contact with cold vessel walls. Confined by magnetic fields, it floats virtually free from contact within the interior of a vacuum chamber. For the magnetic cage, two different designs have prevailed – the tokamak and the stellarator. Both types of system are being investigated at the IPP. In Garching, the Tokamak ASDEX Upgrade is in operation and, as of today, the Wendelstein 7-X stellarator is operating in Greifswald.

At present, only a tokamak is thought to be capable of producing an energy-supplying plasma and this is the international test reactor ITER, which is currently being constructed in Cadarache in the frame of a worldwide collaboration. Wendelstein 7-X, the world's largest stellarator-type fusion device, will not produce energy. Nevertheless, it should demonstrate that stellarators are also suitable as a power plant. Wendelstein 7-X is to put the quality of the plasma equilibrium and confinement on a par with that of a tokamak for the very first time. And with discharges lasting 30 minutes, the stellarator should demonstrate its fundamental advantage – the ability to operate continuously. In contrast, tokamaks can only operate in pulses without auxiliary equipment.