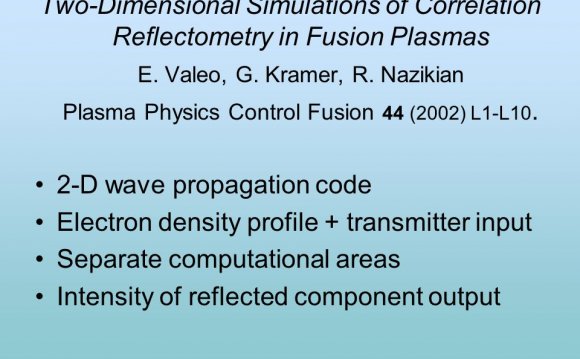 Professor Jarboe received his undergraduate degree in Engineering Physics from the University of Illinois in 1967. He worked a short time for Olin Matheson in East Alton, Illinois and then pursued a doctoral degree at the University of California, Berkeley. In 1974, he received his PhD in plasma physics. He then joined the controlled fusion research division at Los Alamos National Laboratory. He served as group leader from 1983 to 1989 where he studied a very attractive magnetic fusion confinement device called the spheromak. He spent one year beginning in 1985 doing the controlled fusion research at Culham Laboratory in England. He came to the University of Washington in 1989 as Professor of Nuclear Engineering and joined the Department of Aeronautics and Astronautics in 1992. He is a fellow of the American Physical Society.

Professor Jarboe's current research interests lie in plasma physics and controlled fusion. He is presently pursuing three plasma research interests. First, he is Director of the Plasma Science and Innovation Center (PSI-Center). The goal of the center is to develop computational predictability for improved magnetic confinement configurations with controlled fusion applications. The PSI-Center plays an important role in making fusion energy practical and in advancing plasma science in general. Second, he leads the Helicity Injected Torus (HIT) program on Campus. The HIT program investigates the formation and sustainment of fusion confinement configurations using helicity injection current drive. This method eliminates the need for the pulsed Ohmic heating transformer that is normally used and allows steady state operation. The present HIT experiment is developing constant inductive helicity injection for a spheromak. Developing an efficient current drive method for a spheromak that is compatible with good confinement would be a major advance for practical fusion energy. Finally, Professor Jarboe leads a collaboration with the Princeton Plasma Physics Laboratory, where coaxial helicity injection (CHI) current drive, developed at the UW, is being applied to the National Spherical Torus Experiment (NSTX). CHI is to be used on this major US fusion facility for plasma startup and current profile control.

Books of Plasma Physics via Computer Simulation Series in ...

Books of Fundamentals of Plasma Physics