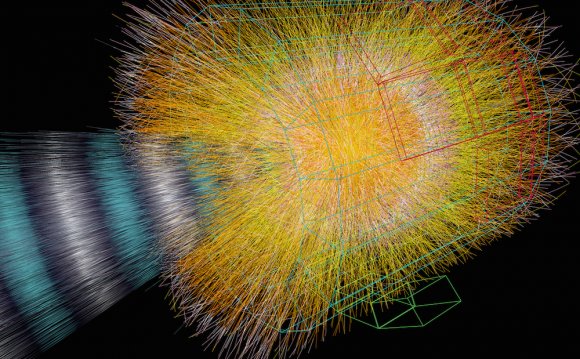 A decade ago, the AdS/CFT correspondence was celebrated as a possible description of the quark gluon plasma. RHIC measurements of heavy ion collisions at that time showed a surprisingly small viscosity that lead to a revision of the previous models. Excitingly, a small viscosity appears naturally in the gauge-theory dual of the AdS/CFT correspondence, nevermind that QCD is neither conformal nor supersymmetric. This development was all the more welcome as it served to demonstrate that string theory is not useless, as critics claimed, but that it can provide insights which improve our understanding of physical processes in the real world.

The gauge-gravity correspondence rapidly became a boom area in high energy physics. After the viscosity, people looked at other observables, notably the energy loss of particles going through the plasma. In highly energetic particle collisions, quarks are produced in pairs, but due to confinement individual quarks are never measured. What is measured instead are color-neutral hadrons that the quarks decay into and that are bundled into the direction of the original quarks. These bundles of hadrons are called jets and in the simplest case there are two of them with total momenta that are back-to-back correlated owing to their common origin from the quark pair.

In a heavy ion collision, one of the quarks may have to pass through the quark gluon plasma and thereby loses energy. This leads to what is known as ‘jet quenching’, a pair of back-to-back correlated jets where the total energy on one side is reduced. The energy loss in the plasma can and has been calculated in different models for heavy ion collisions. There are about a handful of such models, and in the days before the LHC all tried to get in their predictions for the jet quenching at LHC energies, the central question being how the energy loss scales with the increase in collision energy.

After the LHC heavy ion runs, it turned out the data do not agree very well with the scaling expected for energy loss from the AdS/CFT correspondence – in fact from all the models it was the worst prediction. As we discussed in an earlier post, AdS/CFT predicts too much energy loss, the plasma is too strongly coupled.


That the scaling doesn’t fit well with the data need not be too much of a worry because these scaling arguments were quite general and in reality the process of propagation through the quark gluon plasma isn’t quite as simple. But clearly the new data called on theoretical physicists working on AdS/CFT to study the observables and improve their model or to call it a failure and move on. Alas, nothing like that happened.

Since the LHC data came in, for two years or so, I’ve now been sitting through AdS/CFT talks that would inevitably be motivated by the low viscosity of the quark gluon plasma and the RHIC data, frog spawn picture and all. And every time I’d raise my hand at the end of the seminar and ask for the speaker’s opinion on the recent LHC data, expecting an update on the work on that matter and that there is no need to worry because the models can be improved to accommodate the data. Instead, it was like the LHC never happened. I don’t work in this field and don’t even follow the literature closely, but it seemed that I knew more about the problems with the LHC results than the people who got paid for talks motivated by yesterday’s data.

It’s not that the data went entirely unnoticed. A few brave souls took on the issue. In this paper Ficnar, Norona and Gyulassy looked at the effects of higher derivative corrections to the gravity sector. It's somewhat ad-hoc, but apparently does reduce the energy loss. There is however no fit to the data and I’m not sure what this does to other observables. In another work, Ficnar also took into account a time-dependence of the configuration, but the conclusions with respect to the jet quenching and LHC data remain vague and amount to “a more thorough numerical analysis is needed.” In a recent paper, William Horowitz summarized the situation as follows:

“Despite signiﬁcant efforts, AdS/CFT estimates for light quark and gluon energy loss are qualitative at best… it is difficult to imagine that a relatively sophisticated estimate of the suppression would be consistent with data.”
I was thus thrilled when I heard a talk by Stephen Gubser (about recent work with Ficnar) at a conference in Frankfurt this July, because he spoke about a possibility to improve the AdS/CFT model to accommodate the LHC data. Unfortunately, Gubser and collaborators don’t have a paper about this on the arXiv yet, so all I can do is refer you to the slides. My vague recollection is that he said one needs to take into account the momentum on the endpoints of the strings and that this does improve the scaling of the energy loss and fits considerably better with the LHC measurements. Though, if I recall correctly, getting the slope to match the data requires pushing the parameter into a range where one actually shouldn’t trust the model anymore. So in the end this might not solve the problem either.

If that explanation sounds like I don’t really understand the details it’s because I don’t really understand the details. I didn’t take notes, and two months later that’s as much as I can recall when looking at the slides and the Princeton professor has not been very communicative upon my inquiry. I thus just want to draw your attention to this development – if you’re interested in the topic, I recommend you have an eye on Ficnar and Gubser’s next arXiv uploads. For all I can tell, these guys are the only ones who take the issue seriously and so far it doesn’t sound too promising to me. If I’m missing some references, please let me know.

I don’t know enough about the topic to tell how likely it is that the AdS/CFT model can be improved to fit the data, and personally I find the applications to condensed matter systems better motivated. What annoys me about this situation is that people working in the field continue to decorate themselves with false achievements when they use the viscosity of the quark gluon plasma to justify the relevance of their own work and that of string theory by large.