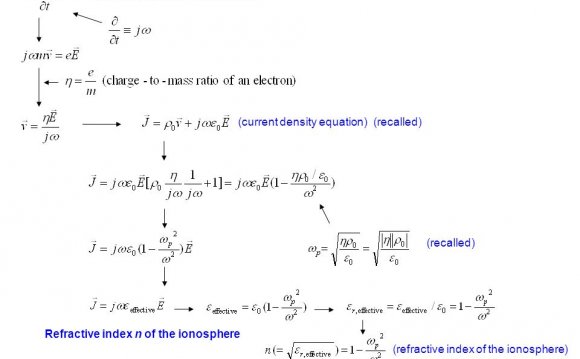 Below is a diagram of the earths upper atmosphere. The ionosphere is divided into several distinct layers as you can see.

Above 50 km to about 600 km (370 mi) is the ionosphere, notable for its effects on radio propagation. At these altitudes, atomic oxygen and nitrogen predominate under very low pressure. High-energy solar UV and X-ray radiation ionize these gases, creating a broad region where ions are created in relative abundance. The ionosphere is subdivided into distinctive D, E and F regions. Ionospheric Refraction The refractive index of an ionospheric layer increases with the density of free-moving electrons. In the most dense regions of the F layer, that density can reach a trillion electrons per cubic meter (1012 e/m3). Even at this high level, radio waves are refracted gradually over a considerable vertical distance, usually amounting to tens of km. Radio waves become useful for terrestrial propagation only when they are refracted enough to bring them back to Earth. See diagram below.

Gradual refraction in the ionosphere allows radio signals to be propagated long distances. It is often convenient to imagine the process as a reflection with an imaginary reflection point at some virtual height above the actual refracting region. The virtual height of an ionospheric layer is the equivalent altitude of a reflection that would produce the same effect as the actual refraction. The virtual height of any ionospheric layer can be determined using an ionospheric sounder, or ionosonde, a sort of vertically oriented radar. The ionosonde sends pulses that sweep over a wide frequency range, generally from 2 MHz to 6 MHz or higher, straight up into the ionosphere. The frequencies of any echoes are recorded against time and then plotted as distance on an ionogram. The highest frequency that returns echoes at vertical incidence is known as the vertical incidence or critical frequency. The critical frequency is almost totally a function of ion density. The higher the ionization at a particular altitude, the higher becomes the critical frequency. Physicists are more apt to call this the plasma frequency, because technically gases in the ionosphere are in a plasma, or partially ionized state. F-layer critical frequencies commonly range from about 1 MHz to as high as 15 MHz.

Basics and early findings The ionosphere plays a basic role in long-distance communication . Ionospheric effects are less apparent in the very high frequencies (30-300 MHz), but they persist at least through 432 MHz. As early as 1902, Oliver Heaviside and Arthur E. Kennelly independently suggested the existence of a layer in the upper atmosphere that could account for the long-distance radio transmissions made the previous year by Guglielmo Marconi and others. Edward Appleton confirmed the existence of the Kennelly-Heaviside layer during the early 1920s and used the letter E on his diagrams to designate the electric waves that were apparently reflected from it. In 1924, Appleton discovered two additional layers in the ionosphere, as he and Robert Watson-Watt named this atmospheric region, and noted them with the letters D and F. Appleton was reluctant to alter this arbitrary nomenclature for fear of discovering yet other layers, so it has stuck to the present day. The basic physics of ionospheric propagation was largely worked out by the 1920s, yet both amateur and professional experimenters made further discoveries through the 1930s and 1940s. Sporadic E, aurora, meteor scatter and several types of field-aligned scattering were among additional ionospheric phenomena that required explanation. 10m and the Ionosphere The 10-m band is well known for extreme variations in characteristics and variety of propagation modes. During solar maxima, long-distance F2 propagation is so efficient that very low power can produce strong signals halfway around the globe. DX is abundant with modest equipment. Under these conditions, the band is usually open from sunrise to a few hours past sunset. During periods of moderate solar activity, 10 m usually opens only to low and transequatorial latitudes around noon. During the solar minimum, there may be no F2 propagation at any time during the day or night. Sporadic E is fairly common on 10 m, especially May through August, although it may appear at any time. Short skip, as it is sometimes called on the HF bands, has little relation to the solar cycle and occurs regardless of F-layer conditions. It provides single-hop communication from 300 to 2300 km (190 to 1400 mi) and multiple-hop opportunities of 4500 km (2800 mi) and farther. Ten meters is a transitional band in that it also shares some of the propagation modes more characteristic of VHF. Meteor scatter, aurora, auroral E and transequatorial spread-F provide the means of making contacts out to 2300 km (1400 mi) and farther, but these modes often go unnoticed at 28 MHz. Techniques similar to those used at VHF can be very effective on 10 m, as signals are usually stronger and more persistent. These exotic modes can be more fully exploited, especially during the solar minimum when F2 DXing has waned.