Build Your Own fusion reactor 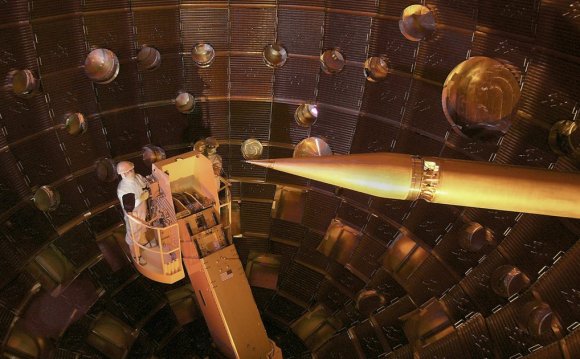 It is constructed from parts from other machines, such as a fan from a computer system

But his most incredible creation is a nuclear fusion reactor, which sits inside his 'box full of creative chaos', as he calls the workshop in the basement of the house he built himself.

He has created the reactor by hand, using components from other gadgets.

Mr Coulter, said: 'I learned to do electrical engineering from parts scavenged from dumpsters from behind the TV store. I had to learn to design things with what I had.'

'We started with parts designed to do something else. This is one of our cooling fans, it came out of a computer system.'

Many scientists believe nuclear fusion is one of the most promising options for generating large amounts of carbon-free energy in the future.

Doug is a former 'Beltway Bandit', producing technology for the intelligence community

Mr Coulter is a gunsmith by trade. Right, a sign in Mr Coulter's 'box full of creative chaos'

Fusion is the process that heats the Sun and all other stars, where atomic nuclei collide together and release energy.

Fusion scientists and engineers are developing the technology to use this process in tomorrow's power stations, but so far there is no viable model.

'The Holy Grail of fusion is to make this into a viable power source.'

Coulter is a champion of sharing information, using his forum to share technological secrets with a like-minded community

He laughs off concerns about radiation leaks.

'There's a lot of seconds were we get no radiation, ' he said. 'This is actually one of the most radiation-quiet places on this planet.

'This is what I do for fun and giggles.'

Coulter is also a champion of sharing information, using his forum to share technological secrets with a like-minded community, including how to build guns and make ammunition.

How to make your own carmite reactor in the twilights forest!

Build your own Robi

Voltz Speed Tutorial | How to build a Working Fusion Reactor