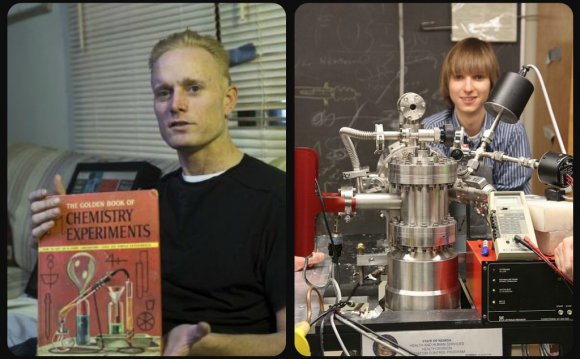 David Hahn was an Eagle Scout who had a merit badge in atomic energy; as everyone should know, that is ample education to build and maintain a nuclear breeder reactor in one’s backyard. So in 1994, that is what he proceeded to do. And it wasn’t too hard. Radioactive elements are all around us.

Take, for example, a household smoke detector. More than 80% of the standard smoke detectors in the US contain an amount of americium-241, a radioactive element with a half life of 432 years. It is the americium-241 that allows the contraption to work. Air flows into an ionization chamber that is pretty much two sheets charged of metal—one positive, one negative—and a little pathway for radiation to enter. The alpha radiation from the americium-241 interacts with the normal oxygen and nitrogen in the air by knocking an electron off the molecule. The results were, of course, a positive ion of the original atom of gas is attracted to the negatively charged plate, and an electron is drawn to the positively charged plate. The smoke detector detects the plates interacting with these particles. Smoke, however, will absorb the ions before they reach the plates, and will set off the alarms.

But don’t be alarmed by it, americium-241 only puts out alpha radiation; the millimeters of plastic casing is ample shielding.

Another common radioactive element is tritium. The same isotope of hydrogen that is used to “boost” nuclear weapons is commonly found in such mundane items as clocks, watches, and telescoping devices. Thorium-232 can be found in gas lanterns. Specifically the small cloth pouch over the flame is coated with a compound containing the radioactive element.

David learned about the tiny amount of americium-241 found in smoke detectors. So he contacted smoke detector companies, and claimed that he needed a large number of them for a school project. One company sold him about a hundred broken detectors for a dollar apiece. But his merit badge did not tell him where the americium was located, so he wrote to an electronics firm in Illinois. Someone there wrote back to say she’d “be happy to help out with ‘your report’.”

Thanks to her help, David extracted the material. He put the americium inside a hollow block of lead with a small hole pricked in one side so that alpha rays would stream out. In front of the block he placed a sheet of aluminum: its atoms absorb alpha rays and kick out neutrons. Thus Mr Hahn was in possession on a working neutron gun.

Hahn bought thousands of lanterns, removed the pouches, and used a blowtorch to reduce them to ash. A thousand bucks worth of lithium batteries, aluminum foil, and a Bunsen burner extracted the thorium, which was in a state that could be transferred into uranium.

And it would have worked, if the neutron gun had been stronger.

Maybe David wasn’t the most astute academic in school, but he was very valiant in his hobbies. He found a vial of radium paint in the back of an antique clock. For $10 he bought the clock, and upgraded his neutron gun.

He built the core out of more aluminum foil and duct tape. Sure, someone would expect that those two materials together could do anything, but they do not make a nuclear core! Even the Russians know that. At least David invested five bones in a Geiger counter, and he used it. When that counter started picking up abnormal readings from down the block he decided that maybe things were getting too hot. He started breaking up his materials.

And got busted for loitering.

More specifically, some the police were called to check out a suspicious person. When they arrived they spotted Hahn, and asked what he was doing. His response of “waiting for a friend” didn’t wash at 3:00AM. In searching the car they found a toolbox sealed up with duct tape. They were a little concerned at first, and much more concerned when Hahn told them it was radioactive.

And that was the end of his homemade reactor. The EPA and the NRC moved in ASAP and enacted the Federal Radiological Emergency Response Plan. (I’m glad the US has one of those.)

In the right hands, smoke detectors, antiques, and and surplus lanterns can make for serious issues. David Hahn is still alive, and suffering no medical problems from his irradiation. Guess that merit badge did him some good.