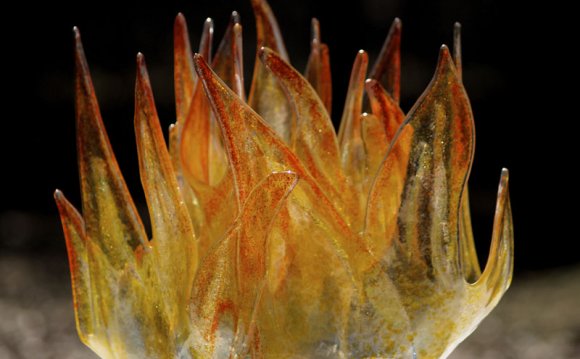 Expanding red giant stars will swallow too-close planets. In the solar system, the sun will engulf Mercury and Venus, and may devour Earth, as well.

A red giant star is a dying star in the last stages of stellar evolution. In only a few billion years, our own sun will turn into a red giant star, expand and engulf the inner planets, possibly even Earth. What does the future hold for the light of our solar system and others like it?

Most of the stars in the universe are main sequence stars — those converting hydrogen into helium via nuclear fusion. A main sequence star may have a mass between a third to eight times that of the sun and eventually burn through the hydrogen in its core. Over its life, the outward pressure of fusion has balanced against the inward pressure of gravity. Once the fusion stops, gravity takes the lead and compresses the star smaller and tighter.

Temperatures increase with the contraction, eventually reaching levels where helium is able to fuse into carbon. Depending on the mass of the star, the helium burning might be gradual or might begin with an explosive flash. The energy produced by the helium fusion causes the star to expand outward to many times its original size.

Red giant stars reach sizes of 100 million to 1 billion kilometers in diameter (62 million to 621 million miles), 100 to 1, 000 times the size of the sun today. Because the energy is spread across a larger area, surface temperatures are actually cooler, reaching only 2, 200 to 3, 200 degrees Celsius (4, 000 to 5, 800 degrees Fahrenheit), a little over half as hot as the sun. This temperature change causes stars to shine in the redder part of the spectrum, leading to the name red giant, though they are often more orangish in appearance.

This picture of the dramatic nebula around the bright red supergiant star Betelgeuse was created from images taken with the VISIR infrared camera on ESO’s Very Large Telescope (VLT). This structure, resembling flames emanating from the star, forms because the behemoth is shedding its material into space.

Stars spend approximately a few thousand to 1 billion years as a red giant. Eventually, the helium in the core runs out and fusion stops. The star shrinks again until a new helium shell reaches the core. When the helium ignites, the outer layers of the star are blown off in huge clouds of gas and dust known as planetary nebulae.

The core continues to collapse in on itself. Smaller stars such as the sun end their lives as compact white dwarfs. The material of larger, more massive stars fall inward until the star eventually becomes a supernova, blowing off gas and dust in a dramatic fiery death.

Though they look serene and silent from our vantage on Earth, stars are actually roiling balls of violent plasma. Test your stellar smarts with this quiz.

Though they look serene and silent from our vantage on Earth, stars are actually roiling balls of violent plasma. Test your stellar smarts with this quiz.

The future of the sun

In approximately 5 billion years, the sun will begin the helium-burning process, turning into a red giant star. When it expands, its outer layers will consume Mercury and Venus, and reach Earth. Scientists are still debating whether or not our planet will be engulfed, or whether it will orbit dangerously close to the dimmer star. Either way, life as we know it on Earth will cease to exist.

The changing sun may provide hope to other planets, however. When stars morph into red giants, they change the habitable zones of their system. The habitable zone is the region where liquid water can exist, considered by most scientists to be the area ripe for life to evolve. Because a star remains a red giant for approximately a billion years, it may be possible for life to arise on bodies in the outer solar system, which will be closer to the sun.