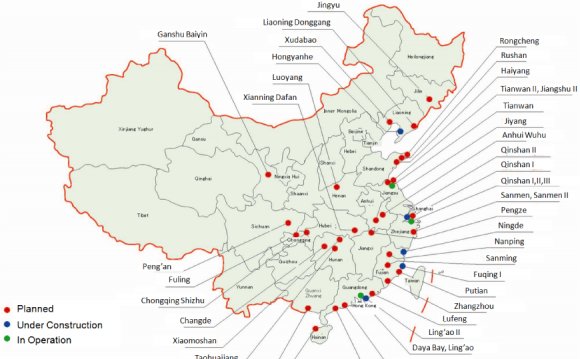 China’s plans for a rapid expansion of nuclear power plants are “insane” because the country is not investing enough in safety controls, a leading Chinese scientist has warned.

Proposals to build plants inland, as China ends a moratorium on new generators imposed after the Fukushima disaster in March 2011, are particularly risky, the physicist He Zuoxiu said, because if there was an accident it could contaminate rivers that hundreds of millions of people rely on for water and taint groundwater supplies to vast swathes of important farmlands.

China halted the approval of new reactors in 2011 in order to review its safety standards, but gave the go-ahead in March for two units, part of an attempt to surpass Japan’s nuclear-generating capacity by 2020 and become the world’s biggest user of nuclear power a decade later.

Barack Obama recently announced plans to renew a nuclear cooperation deal with Beijing that would allow it to buy more US-designed reactors, and potentially pursue the technology to reprocess plutonium from spent fuel.

The government is keen to expand nuclear generation as part of a wider effort to reduce air pollution and greenhouse gas emissions, and cut dependence on imported oil and gas.

He, who worked on China’s nuclear weapons programme, said the planned rollout was going too fast to ensure it had the safety and monitoring expertise needed to avert an accident.

“There are currently two voices on nuclear energy in China. One prioritises safety while the other prioritises development, ” He told the Guardian in an interview at the Chinese Academy of Sciences.

He spoke of risks including “corruption, poor management abilities and decision-making capabilities”. He said: “They want to build 58 (gigawatts of nuclear generating capacity) by 2020 and eventually 120 to 200. This is insane.”

He’s challenge to the nuclear plans is particularly powerful because of his scientific credentials and a long history of taking a pro-government stance on controversial issues, from the 1950s destruction of Beijing’s city walls to the crackdown in the 1990s on the religious group Falun Gong.

He would like to see China stop its expansion once the plants that have been approved or are now under construction are finished, and then gain a few decades experience of running them safely before expanding again. Almost all the country’s working reactors started up after 2000.

“China currently does not have enough experience to make sound judgments on whether there could be accidents, ” he said. “The number of reactors and the amount of time they have been operating safely both matter.

“The safety reviews after Fukushima found some problems, but only minor ones, and the final conclusion is that China’s nuclear power is safe. But the safety checks were carried out under the old standards and the standards themselves clearly need big improvements.”

Chinese government officials argue that nuclear technology has improved since the Chernobyl and Three Mile Island accidents, He said, but that ignores the role human error and flawed safety regimes played in both cases.

The operator of Japan’s Fukushima plant has admitted that the company failed to take stronger disaster prevention measures ahead of the earthquake and tsunami, for fear of lawsuits and protests.

“Japan has better technology and better management, and yet it couldn’t avoid an accident despite the fact that it tried very hard to learn from the US and USSR, ” He said, adding that China’s nuclear monitor has sparser staffing than Japan’s, and offers low salaries that will not attract the best young scientists.

China had considered and then rejected stronger standards, He said, because of the huge pressure for a rapid expansion and companies powerful enough to put corporate profits ahead of national security.

“There were internal discussions on upgrading standards in the past four years, but doing so would require a lot more investment which would affect the competitiveness and profitability of nuclear power, ” He said. “Nuclear energy costs are cheap because we lower our standards.”

Rather than encouraging debate to expose weaknesses, the government tries to stamp it out, and in a country where challenging officials is risky, there is no mechanism to encourage or protect whistleblowers.

He said: “At the moment, the ministry of environmental protection is considering a new watchdog. When they invited me over for a discussion, I told them: ‘Your safety watchdog is not independent. It listens to the national nuclear corporation and hence the scrutiny is fake’.”

China is short of water, and areas with enough water to cool a plant in daily operations or an emergency are densely populated. He said: “They say they could build the plants in deserts, but the problem is there isn’t any water in the deserts.”

If plants are built near cities and farmland, any accident would put millions of people at risk from immediate fallout and long-term contamination similar to the radioactive leaks at Fukushima.

“If they build plants in places with a lot of water, the consequences of a nuclear leakage would be extremely grave, ” He said. “I wouldn’t oppose it if they can guarantee it is 100% safe, but no one can guarantee this.

“To be honest, as I’m already 88, it won’t affect me much whether or not nuclear plants are safe. But I am concerned about the welfare of our children and think we shouldn’t just evaluate the profitability of new projects.”