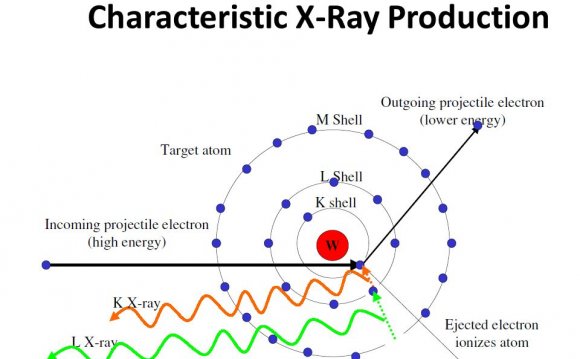 The components of the X-ray tube include a glass envelope containing a high vacuum. A cathode or negative electrode which contains a tungsten filament, which when heated emits electrons in a process called 'thermionic emission'. The cathode also has a focussing cup to better direct the emitted electrons across the vacuum to hit the target. The anode or positive electrode is a thick copper rod with a small tungsten target at the end. Tungsten is required as it has a high atomic number to improve the efficiency of bremsstrahlung x-ray production (see below), and a high melting point. There is a good deal of heat generated and hence the need for high melting points and the copper anode is able to conduct heat away effectively. Some machines have an oil based cooling system ported through the anode, while others have a spinning electrode to effectively increase the surface area. Either way, considerable heat needs to be dissipated. A potential difference, or voltage is applied between the cathode and anode. The tungsten filament (cathode) is heated by an independent current and the thermionically emitted electrons are accelerated across the potential difference to a high velocity before striking the tungsten target. The high vacuum is needed to reduce the electron/atom collisions which waste accelerating energy. The electrons that hit the tungsten target undergo sudden deflection because of the interactions with the tungsten nucleus. The tungsten target is usually angled to direct the resultant xrays towards a consistent portion or window in the tube wall.

Some additions to this basic set up include the anode hood made of copper and tungsten that act like blinkers to prevent stray electrons from striking the walls of the tube. The copper catches the electrons and the tungsten attenuates the photons produced in the copper. The window is thin and made of beryllium. Beryllium is chosen because it is a metal which has little effect on the photon beam and can effectively maintain the vacuum.

X-rays are produced by two main mechanisms and come in two varieties - characteristic and bremsstrahlung xrays
Characteristic xrays
Electrons are the same whether orbiting in shells around the nucleus, or produced inside an xray generator. When ever their velocity or position is changed, there is a loss of energy that takes a radiative form (xrays). When electrons travelling at the target have their direction changed, a spectrum of xrays results. However the electrons circulating in the atoms can also change.

While most of the electrons have their path changed and little else, some will collide with electrons. Sufficient energy in such collisions can result in the ejection of an orbiting electron. 'Sufficient energy' means enough to overcome the bonding energy of the orbiting electron. The impacting electron will move off with reduced energy, and the ejected electron will move off in a different direction and speed with the remaining energy, there is an empty position in one of the shells. The remaining orbiting electrons will 'pack down' to fill the hole, and when changing orbits will lose energy and emit this as radiation. The orbiting levels are fixed as a physical property fixing the elemental identity of an atom, and so the energy emission will be characteristic of that atom. The energy will be mono-energetic and so appear as a spike rather than a continuous spectrum. Electrons ejected come from the K, L or M orbits. The other corollary of this type of interaction is that the atom becomes an ion (it has lost an ejected electron!).

All atoms will produce characteristic radiation but not all are visible in the xray portion of the electromagnetic spectrum. Elements with higher atomic numbers have their K, L, M or N shells of sufficient energy to be called 'xrays'. The discrete characteristic radiation energies are equal to the difference in the energy level of the outer and inner orbital electrons.


Bremsstrahlung is a German word meaning “braking radiation” which describes the process of xray generation. The high speed electron impacts on the target and at the atomic level approaches the nucleus. There is no actual collision between electron and nucleus because the electron interacts with the Coulombic nuclear forces and its vector quantities of direction and velocity are changed. Since kinetic energy derives from velocity (KE=1/2mv^2). The change in energy is radiated as electromagnetic radiation. The amount of energy means a short wavelength within the xray band.

As the electron is not destroyed, it can undergo multiple interactions, and even initial interactions will vary from minor to major energy changes depending on the actual angle and proximity of attack, and the point of 'impact' on the nucleus. As a result, bremsstrahlung radiation will have continuous spectrum where the maximum energy relates to the entire KE of the electron but will be infrequent. The energy spectrum without filtration is a straight line that matches the formula

where
IE = intensity of photons of energy E
is a constant,
Z is the atomic number of the target,
Em is the maximum photon energy which is numerically equal to the applied kilovolts peak (kVp).The average energy of a bremsstrahlung-derived beam is approximately 1/3 of the maximum energy (or kVp).

The direction of bremsstrahlung xrays is decidedly horticultural. Where the energy (kVp) of the incident electron beam is around 100 keV, bremsstrahlung production has a spatial orientation described as 'anisotropic', that is equally in all directions.