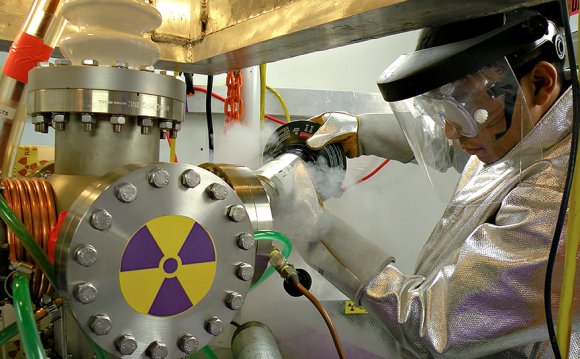 Boing Boing's Mark Frauenfelder told us that the secret antidote to a stressful modern life is making things with your own two hands, but some people really take DIY to an extreme.

Meet Mark Suppes, a web developer by day and an amateur physicist/engineer at night who's developing his own homemade nuclear fusion reactor.

Yes, you read that right: Nuclear. Fusion. Reactor. And no, it's actually not illegal to make one in your own home.

Mr Suppes, 32, is part of a growing community of "fusioneers" - amateur science junkies who are building homemade fusion reactors, for fun and with an eye to being part of the solution to that problem.

While they might un-nerve the neighbours, fusion reactors of this kind are perfectly legal in the US.

"As long as they [private citizens] obtain that material [the components of the reactor] legally, they could do whatever they want, " says Anne Stark, senior public information officer for California's Lawrence Livermore National Laboratory.

But rest assured, folks. Without nuclear materials like uranium or plutonium, these gadgets are perfectly safe:

"There is no chance of any kind of accident with fusion, " says Neil Calder, communications chief for Iter, a multi-national project begun in 1985 with the aim of demonstrating the feasibility of fusion power.