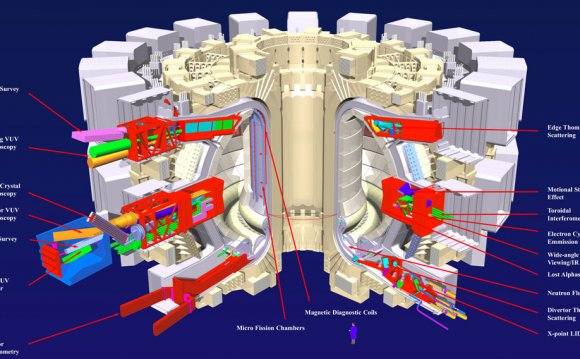 The greatest fusion reactor in our neighborhood sends energy free for the harvesting from about 8 light-minutes away, where it safely burns and flares without any help at all from the small, blue marble that orbits it once a year. But expansion of photovoltaic technologies to capture that solar power has had a hard time competing against the big boys of power: petroleum, coal, and nuclear reactors.

It's no wonder scientists and engineers continue to pursue the dream of harnessing nuclear fusion here on Earth. A "small, modular, efficient fusion plant" designed by a team at MIT promises new hope for growth in the fusion industry. Equipment of similar scale and complexity has been constructed in "within about five years" the team notes.

By comparison, August 4th marked the fifth anniversary of breaking ground on the world's biggest nuclear fusion reactor project, the ITER* project. So far, the site remains a forest of cranes and rebar:

David Kingham, CEO of UK-based Tokamak Energy Ltd., who reviewed the MIT design but is not connected with the research, praises the work:

"Fusion energy is certain to be the most important source of electricity on earth in the 22nd century, but we need it much sooner than that to avoid catastrophic global warming. This paper...should be catching the attention of policy makers, philanthropists and private investors.”

The MIT affordable, robust, compact (ARC) reactor uses the same tokamak (donut-shaped) architecture as the ITER plant, but applies much stronger magnets based on commercially available, rare-earth barium copper oxide (REBCO) superconductors. The stronger magnetic field contains the super-hot plasma, a mass of gases in which hydrogen atoms fuse to form helium (yes, the party balloon gas that gives you a squeaky voice), in a much smaller device. This reduces the diameter to half of ITER's, making building it quicker and more economical.

But the size advantage is not the only bonus. The power potential in fusion reactors increases by the fourth power of the increase in the magnetic field. This means doubling the magnetic field strength can produce16 times as much power.

The MIT ARC reactor has other benefits as well: the fusion power core can be removed from the donut-shaped reactor without having to dismantle the entire device (useful for testing materials) and a liquid replaces most of the solid blanketing the fusion chamber, allowing circulation to reduce degradation in the high temperature application and facilitating replacement which reduces the cost of maintenance.

On paper, the ARC design could achieve Q = 3, but that could improve to 5-6, and generate electricity for about 100, 000 people. (ITER scientists hope to be the first to achieve the holy grail of making more energy with a fusion reactor than has to be supplier to power the reactor itself. In fact, the team has set themselves the ambitious target of Q ≥ 10 - or a return of ten times as much electricity as used.)

Read more about it in ARC: A compact, high-field, fusion nuclear science facility and demonstration power plant with demountable magnets in the journal Fusion Engineering and Design.

*[interesting fact: ITER means "the way" in Latin, which is the officially endorsed explanation for the name after International Thermonuclear Experimental Reactor was discarded, presumably for being too "nuclear"]