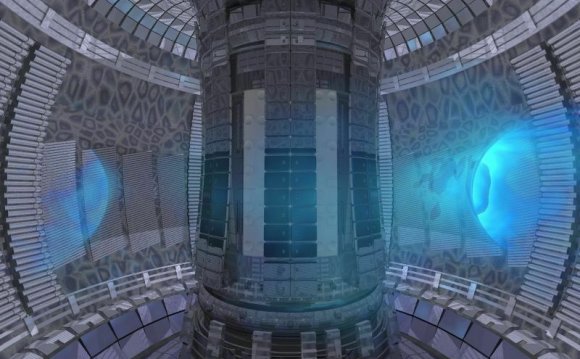 The following excerpt is from The Boy Who Played with Fusion by Tom Clynes. The book, tells the story of science prodigy Taylor Wilson, who by age 14 had built a 500-million-degree nuclear fusion reactor.

He and Brinsmead and Phaneuf watch the gauge as the air is sucked out of the reaction chamber and the pressure decreases to the equivalent of 100, 000 feet above sea level . . . then the space station’s orbit . . . then the surface of the moon.

Standing just behind Taylor, Phaneuf peers over the boy’s left shoulder, Brinsmead over his right.

“Looks like switching out that valve really did the trick, ” Phaneuf says. “You’re getting better vacuum than I’ve ever seen.”

Taylor turns a knob to start bringing the voltage up. The temperature moves past 100 degrees C; at this point, any condensation in the chamber would have vaporized and been sucked out.

Taylor brings up the power on the vacuum pumps even more. “And now, ” he says, “we’re entering interstellar space . . .”

Brinsmead says, “When you were in your grandma’s garage and you got the idea to try to build this thing, did you ever imagine you’d be at this point, doing what you’re about to do?”

Taylor scans the gauges. “I’m going to open the line and bring in a little deuterium, ” he says, “and give the grid a little negative voltage.”

Taylor knew that achieving fusion depended on getting a just-right balance of vacuum, gas supply, and voltage. While Phaneuf was away, he and Brinsmead made several test runs, experimenting with different combinations. “I think he’s really got the parameters optimized now, ” Brinsmead tells Phaneuf.

“Ten thousand volts, ” Taylor calls out, glancing at the meter. He cranks the voltage knob a little more and checks the instruments. “I’m going to pour on more fuel to balance the pump.

Twenty thousand volts now, and . . .” —he glances at the video monitor —“we’ve got plasma!”

Sure enough, a pale blue cloud of plasma has appeared, rising and hovering, ghostlike, in the center of the grid. Taylor looks at Phaneuf, then Brinsmead, who nods. “Let’s go for it, ” Brinsmead says.

Taylor turns the knob, taking the voltage higher. “I’ve got it up to twenty-five thousand volts now, ” Taylor says. “I’m going to outgas it a little and push the voltage up a little bit more.” The power supply crackles.

From behind, Taylor looks like a small Oz kind of figure, his hands darting back and forth, checking gauges, pulling levers, finessing dials. He adjusts the pressure and voltage again while Brinsmead and Phaneuf keep their eyes on the video monitor. They can see the tungsten wires beginning to glow, then brightening to a vivid orange. “When the wires disappear, ” Phaneuf says, “that’s when you know you have a lethal radiation field.”

The two men watch the monitor while Taylor concentrates on the controls and gauges, especially Snoopy, the portable neutron detector that they’ve set up just to the side of the lead-block wall, a few feet away.

“We should be getting pretty close to star territory now, ” Brinsmead says.

Phaneuf squints at the monitor. Rays of plasma dart between gaps in the now-invisible grid as deuterium atoms, accelerated by the tremendous voltages, begin to collide. The blue-white plasma starts to throw off purple sparklets.

Inside the reaction chamber, separated from the outside world by two inches of stainless steel, deuterium atoms are stripped of their electrons and accelerated toward the dense, superheated plasma core at the center. Each second, tens of thousands of these ions collide violently enough to fuse and release tiny amounts of mass-energy as highly energetic neutrons.

In other words, nuclear fusion reactions are taking place. Taylor smiles ever so slightly and keeps his hands on the controls. “Let’s see what we can do now, ” he says, cranking the voltage up. “Whoa, look at Snoopy now!” Phaneuf says, grinning. The detector registers two hundred thousand neutrons per second, then three hundred thousand—“and still climbing.”

Brinsmead lets out a whoop as the neutron gauge tops out.

“Snoopy’s pegged!” he yells, doing a little dance. “Someone needs to turn up the range.”

Taylor makes a move for it, but Phaneuf grabs him lightly by the sleeve, stopping him. “Taylor, don’t go over there, no.” The stripped- away electrons hitting the chamber’s wall are emerging as x-rays. Phaneuf reaches out with the x-ray detector, takes a reading, and decides it’s worth the risk. He darts to the neutron detector and quickly dials up the range.

“Get away from that, Ron!” Brinsmead says, laughing as Phaneuf jumps back behind the protective wall of lead.

Taylor glances at the monitor, where the star in the center of the machine is now glowing so brightly that the surrounding grid has disappeared completely.

“Just a little more, ” Taylor says under his breath as he nudges the voltage up, bringing the temperature of his reactor’s plasma core to an almost incomprehensible 580 million degrees —some forty times as hot as the core of the sun.

On the video screen, purple sparks fly away from the plasma cloud, illuminating the wonder in the faces of Phaneuf and Brinsmead, who stand in a half-orbit around Taylor. In the glow of the boy’s creation, the men suddenly look years younger.

Taylor keeps his thin fingers on the dial. As the atoms inside the fusor collide and fuse and throw off their energy—1.1 million neutrons per second, then 1.2 million—Taylor’s two mentors take a step back, shaking their heads and wearing ear-to-ear grins.