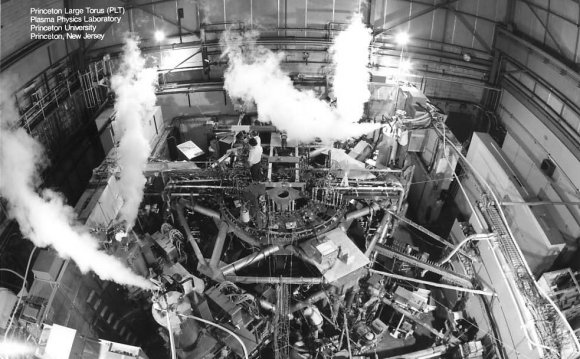 Fusion is back in the news, and not just because Lockheed is claiming to have solved the world’s every problem with magical million-dollar truck-sized generators. Historically, fusion research was all about possible strategies and mechanisms that might one day allow for controlled fusion; today, researchers are now at the point that they know specifically which breakthroughs must occur to make the technology viable — and, as always occurs in such situations these days, the upgrades have been coming in quickly. Several large, well-funded teams are competing to be the first to generate one net joule of energy from fusion, but an academic team from the University of Washington may be doing that work that ends up winning. They’ve dreamed up a new fusion power design called a Dynomak, and it could make fusion power stations cost competitive with coal.

What does “cost competitive” mean? Well, relative to prior fusion projections, a Dynomak facility could be built for about a tenth the cost of competing fusion reactor designs and produce up to five times as much power. This lets it catch up to the price-per-watt of coal, though only at the gigawatt scale; a 1GW Dynomak reactor might cost $2.7 billion, to a modern average of $2.8 billion for comparable coal plants. It’s all theoretical of course — this team has presented a major improvement to reactor design, but it will be up to larger, better funded research teams to actually make use of it. What’s the big innovation, then?

There are two (major) schools in fusion tech right now: magnetic and laser confinement. In both cases you have to shrink down a sample of your fusion fuel — usually a mix of hydrogen and helium — so it get super-pressurized and thus super-heated, beginning the fusion process, and in both cases we need incredibly fine control of our inward pressing force. Whether it’s a complex magnetic field or the combined force of trillions of watts of laser light, getting strong-enough and fine-enough control of confinement is undoubtedly the biggest hurdle facing consumer fusion tech. The University of Washington’s work could make that process far more economical. By wading into the mathematics of magnetic confinement, they may have negated the need for magnets altogether.

Probably the most widely publicized design for a magnetic fusion generator is based on a tokamak, a huge, donut-shaped magnet. The precisely shaped magnetic field it creates has been proven to be capable of containing a fusion reaction (just not while using less energy than the fusion itself creates). The costs are also prohibitive, as with the test model for ITER’s 30, 000 pound super-conducting Slinky which recently arrived. Just as we’re finding with MRI machines, super-cooled magnets are a limiting factor for fusion power, and so we then developed another design called a spheromak — a magnetic fusion machine that creates its confining field by running current directly into the sphere of plasma at the power station’s heart.

This is obviously a huge improvement to the tokamak, but as you might imagine, just pumping electricity into a sample undergoing fusion isn’t very precise. Spheromak designs had the theoretical advantage in cost and efficiency, but struggled to show that they could actually work. Then, two years ago, this University of Washington team published an idea called imposed dynamo current drive (hence “Dynomak”), a proposed model for predicting the magnetic field based on the injection of outside magnetic fields. This was hailed at the time as having huge implications for fusion power, and now we’re seeing some hard numbers to that effect. [Research paper: ]

Essentially, the Dynomak is a precisely controlled spheromak reactor that uses imposed dynamo current drive to control the magnetic field it creates. This means we might be able to keep heated hydrogen isotopes in one spot without having to leverage several national economies to do it, or further deplete helium reserves and kill the birthdays of tomorrow.

That’s great, but this team’s test rig is only about 10% as big as it ought to be and uses only three of the final six “helicity injectors” that make the Dynomak possible. Until a full-scale test run is conducted, this will be just another fusion fairytale. Still, given the incredible cost benefits we’d enjoy if it is correct, this seems like an idea very worth exploring.

Fusion Power Could Happen Sooner Than You Think