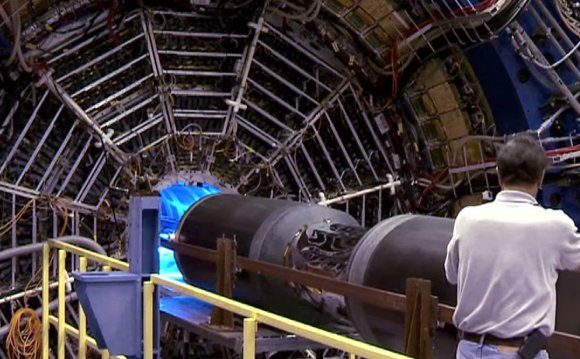 The primordial soup of matter that existed only split-seconds after the Big Bang is now getting recreated in the most powerful particle colliders in the world.

Such research could not only help shed light on exotic states of matter, but also on whether extra dimensions of reality exist, a discovery that could help lead to a so-called "theory of everything, " researchers say.

The hearts of the atoms that we are made of consist of protons and neutrons. These subatomic particles, in turn, are made of building blocks known as quarks, which are glued together by particles aptly named gluons.

Quarks are bound extraordinarily tightly together by gluons. However, in the first ten- millionths of a second after the Big Bang, the universe was hot enough to keep quarks apart. The result would have been a hot dense mix of quarks and gluons known as a quark-gluon plasma. Much remains uncertain about what this primordial soup would have been like, since quarks and gluons can interact with each other in extraordinarily complex ways.

"We have a new state of matter for which we can write down the mathematical law governing its properties in a single line, but after 30 years of theoretical research, we still do not understand its microscopic structure even in rough terms, " said theoretical physicist Berndt Müller at Duke University in Durham, N.C. "The reason for this is that we still lack the mathematics that would allow us to predict the structure and properties of the quark-gluon plasma starting from its basic physics law. We can calculate some of its properties by means of raw computer power, but that does not tell us how it works."

Now the most powerful particle colliders in the world are recreating this primordial soup by heating matter beyond 3.6 trillion degrees Fahrenheit (2 trillion degrees Celsius). The hope is that a better understanding of quark-gluon plasmas can shed light on the evolution of the universe. [Twisted Physics: 7 Mind-Blowing Findings]

The colliders in question take heavy ions — atoms that have had their outer cloud of electrons removed — and slam beams of them against each other when they are traveling at nearly the speed of light. This briefly liberates their constituent quarks and gluons.

The Relativistic Heavy Ion Collider (RHIC) at Brookhaven National Laboratory in New York was the world's first heavy-ion collider, and has explored quark-gluon plasmas since 2000. The most powerful particle accelerator in the world, the Large Hadron Collider (LHC) on the French-Swiss border, also collides heavy ions together, although only about one month per year.

Surprisingly, experiments at RHIC revealed that quark-gluon plasmas are nearly perfect liquids, "the best liquid ever discovered, " Müller told LiveScience. This means they flow with virtually no viscosity (or resistance), data the LHC later confirmed.

Unexpectedly, such liquid behavior is predicted in scenarios involving superstring theories. These scenarios suggest extra dimensions of reality other than space and time exist in order to unite existing models of how the forces of the universe work into one all-encompassing theory. These particle collider findings therefore suggest that further exploration of quark-gluon plasmas could help gather the evidence needed to discover a "theory of everything."

"There has been an enormous effort in recent decades to explore the physical phenomena emerging from superstring theories with their additional dimensions, " Müller said. "The quark-gluon plasma is providing a testbed for these very speculative ideas. It may be a bit overstated, but you could perhaps say that heavy ion experiments at RHIC and LHC currently provide us with the best tests of how certain aspects of string theory may work." [Top 10 Unexplained Phenomena]

Quark-gluon plasmas may also shed light on other exotic states of matter whose constituents strongly interact with other and in which the strange world of quantum physics plays a key role. One example includes Bose-Einstein condensates, where many atoms work together to essentially behave as giant "super-atoms."