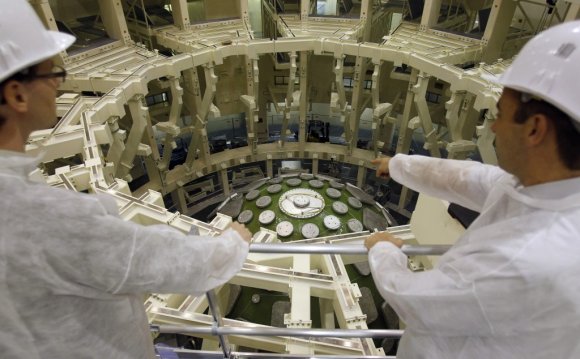 The sun was man’s first energy source, and fusion is what has kept the sun burning for nearly 5 billion years. But creating fusion power here on Earth has long been an elusive dream to scientists and science fiction fans alike, said Mat Kaplan, host of KPCC’s NEXT science series.

If only we could make a fuel with relatively few pollutants and the ability to provide self-sustaining power for thousands of years.

After 60 years of research and experiments, the dream is a lot closer to reality, but we still face some serious obstacles, according to the three scientists who joined Kaplan at KPCC’s Crawford Family Forum June 30 to discuss the future of fusion: Ned Sauthoff, director of the US ITER Project Office at the Oak Ridge National Laboratory; John Parmentola, senior vice president of General Atomics’ Energy & Advance Concepts Group, one of ITER’s suppliers, and William Heidbrink, professor of Physics & Astronomy in the School of Physical Sciences at the University of California, Irvine.

“I’m quite confident that we will produce fusion energy, ” said Heidbrink, an expert in experimental plasma physics. “I’m far less certain whether it will become a technology that is really viable economically.”

For instance, ITER, the International Thermonuclear Experimental Reactor, is spending at least €13 billion during its 10-year construction phase to build a 23, 000-ton tokamak in Saint Paul-lez-Durance, France. A tokamak is a kind of giant hollow donut that uses powerful electromagnetic fields to hold the superheated plasma involved in fusion. The funding is being shared by ITER’s seven primary member nations—China, the European Union, India, Japan, Korea, Russia and the United States. Together, they represent 35 countries, and ITER is the first to point out that the €13 billion is just an estimate.

But if they’re successful, the benefits could be world-changing. Based on the world’s annual energy consumption of about 500 quadrillion btu (quads), a self-sustaining fusion reactor could produce 16, 000 years of energy for world consumption, Parmentola said.

To put this into perspective, “if you wanted to produce 1, 000 million watts of electricity for a day, you would need 18 million pounds of coal—that’s 80 times an individual rail car of coal for just one day to produce 1, 000 megawatts of electricity, ” he said. “What would you need for a fusion plant? A pound of deuterium and 1.5 pounds of tritium.”

And the waste from that electricity?

With the coal, “about 60 million pounds of carbon dioxide, 1.2 million pounds of sulfur dioxide and 160, 000 pounds nitrous oxide, ” Parmentola said. “And the waste from a fusion plant? Two pounds of helium — if you consider that waste — that you can use to fill up 400 balloons, ”

But here’s the catch: Deuterium is easily pulled out of sea water, but tritium, which must be produced from lithium, is far more expensive, more than $100 million per kilogram on today’s open market, Parmentola said..

“Why? Because it’s not a natural substance. We have to produce it, ” Parmentola said. “We have to demonstrate that not only can a fusion reactor produce its own fuel, but we can produce it cost effectively, otherwise your price of electricity is going to be very, very high. We have to show we can reduce the cost of electricity by a factor of 100, to $1 million per kilogram (for tritium). That’s within the range of getting to an affordable cost for electricity.”

Another big issue is that the high-energy neutrons bouncing around to make fusion can damage the materials inside the tokamak, Parmentola said. “The current estimates are that the materials can last two, three, four years before we have to change them out, but we need them to last longer, because you have to shut down the reactor to take out all those materials, and that makes the reactor unavailable.”

Sauthoff, who spoke via Skype, acknowledged the challenges, but thinks they eventually will be overcome.

“We’re getting much better designing materials from scratch...atom by atom” he said. “I’m confident the ongoing development of computers, materials and instrumentation are going to allow us to gain a tremendously greater understanding of how things work and don’t work, and, based on our understanding, to work our way around the problems. I’m an optimist who says the human mind is capable of addressing problems and solving them.”

Our video of Kaplan’s 90-minute discussion has lots of details about the fusion process, the ITER project, and some of the obstacles that still need to be overcome to create fusion power.

Fossils or Fusion? Your Energy Future

Bringing Star Power to Earth: Is Fusion Energy in Our Future?