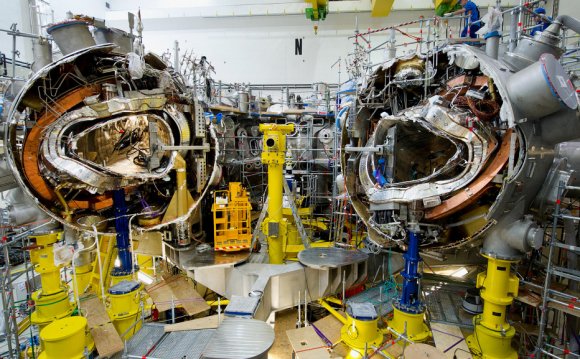 In the sun, massive gravitational forces create the right conditions for this, but on Earth they are much harder to achieve. Fusion fuel—different isotopes of hydrogen—must be heated to extreme temperatures of some 100 million degrees Celsius, and must be kept dense enough, and confined for long enough (at least one second), to trigger the energy release. The aim of the controlled fusion research program is to achieve "ignition", which occurs when enough fusion reactions take place for the process to become self-sustaining, with fresh fuel then being added to continue it.

In principle, fusion has some extremely attractive features. The big advantage of fusion compared with fossil-fuel-based energy production is its relatively small fuel requirements. For the same amount of energy, fusion requires about six orders of magnitude (~106) less fuel compared with chemical energy sources (coal, oil, etc.). A convenient way to think about this is to consider that the hydrogen in an ordinary cup of tap water contains the energy equivalent of a full tank of motor gasoline in an automobile. That is, the approximately one drop of heavy water in that cup could, through fusion, provide as much energy as 20 gallons of motor gasoline.

With current technology, the reaction most readily feasible is between the nuclei of the two heavy forms (isotopes) of hydrogen—deuterium (D) and tritium (T). Each D-T fusion event releases 17.6 MeV (2.8 x 10-12 joule, compared with 200 MeV for a uranium-235 (235U) fission). Deuterium occurs naturally in seawater (30 grams per cubic meter), which makes it very abundant relative to other energy resources. Tritium does not occur naturally and is radioactive, with a half-life of around 12 years. It can be made in a conventional nuclear reactor, or in the present context, bred in a fusion system from lithium. Lithium is found in large quantities (30 parts per million) in the Earth's crust and in weaker concentrations in the sea. While the D-T reaction is the main focus of attention, long-term hopes are for a D-D reaction, but this requires much higher temperatures.