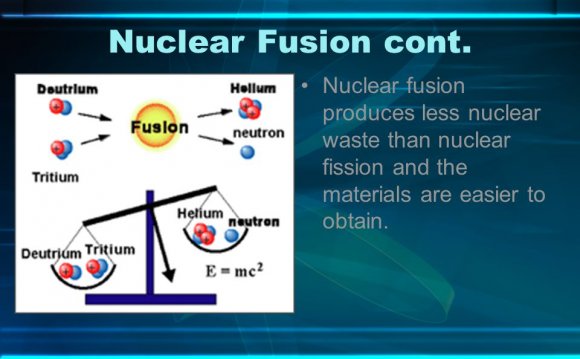 A decision has finally been made to site the 10bn-euro (£6.6bn) Iter nuclear fusion reactor at Cadarache in France. The announcement in June 2005 brought to an end months of argument between the project partners - the EU, the US, Japan, Russia, China and South Korea. India has since also joined the project.

Iter is an experimental reactor that will attempt to reproduce on Earth the nuclear reactions that power the Sun and other stars. It will consolidate all that has been learnt over many decades of study. If it works, and the technologies are proven to be practical, the international community will then build a prototype commercial reactor, dubbed Demo. The final step would be to roll out fusion technology across the globe.

What exactly is fusion?

Fusion works on the principle that energy can be released by forcing together atomic nuclei rather than by splitting them, as in the case of the fission reactions that drive existing nuclear power stations.

No materials on Earth could withstand direct contact with such heat. To achieve fusion, therefore, scientists have devised a solution in which a super-heated gas, or plasma, is held and squeezed inside an intense doughnut-shaped magnetic field.

What are the advantages of fusion?

The best fuel for fusion comprises two types, or isotopes, of hydrogen: deuterium and tritium. The former can be derived from water which is abundant and available everywhere. The latter can be produced from lithium, which is plentiful in the Earth's crust.

Unlike the burning of fossil fuels, fusion reactions produce no carbon dioxide, the greenhouse gas blamed by scientists for warming the planet.

Fusion scientists also say the system would be inherently safe because any malfunction would result in a rapid shutdown.

Yes. The neutrons produced in fusion reactions will "activate" the materials used in the walls of Iter's plasma chamber. But one of the project's tasks will be to find the materials that best withstand this bombardment.

This could result in waste materials that are safe to handle in a relatively modest timescale (50-100 years), compared with the much longer lived radioactive waste (many thousands of years) produced as a direct result of splitting atoms in fission reactions.

It has been calculated that after 100 years of post-operation radioactive decay, Iter will be left with about 6, 000 tonnes of waste. When packaged, this would be equivalent to a cube with about 10m edges.

How soon will Iter be built?

The 28 June meeting of the Iter partners agreed to site the reactor at Cadarache in southern France over Rokkasho in northern Japan. Further progress on technical issues is still required, and construction is expected to take at least a decade.

How much will Iter cost?

Iter construction costs are estimated at 4.57 billion euros (at 2000 prices), to be spread over about 10 years. Estimated total operating costs over the expected operational lifetime of about 20 years are of a similar order.

How will Iter be financed?

Initially it was decided that the EU and France would contribute 50% of the construction costs, the rest being shared by other partners. Because Japan agreed to stand aside in favour of Cadarache, it gets favourable terms. Japan will get to host a related materials research facility - of which half the construction costs will be shouldered by the EU. Its scientists will get a larger share of Iter's research posts.

The EU will now support a Japanese official to become the director-general of the Iter project; and will also back Japan to host the Demo fusion reactor if, or when, it gets built.

Why is the EU so keen to host the reactor?

Iter will require considerable investment from the partners, but the potential pay-offs are thought to be well worth it.

Hosting the experimental reactor will put the EU at the front of the queue to take commercial advantage of fusion.

The project is expected to generate more than 10, 000 jobs and the expertise developed on Iter will allow Europe to reap the benefits of spin-off technologies.

Why is fusion energy seen to be so desirable?

We cannot rely on fossil fuels indefinitely. Firstly, supplies of oil, coal and gas are finite and will eventually run down. Secondly, the greenhouse gases produced through the burning of fossil fuels are a major driver of climate change, scientists believe.

However, demand for energy is also increasing. In 1990, about 75% of the world's population (those in the developing countries) were responsible for only 33% of the world's energy consumption.

By the year 2020, that 75% is likely to have risen to 85% and the energy consumption to around 55%. Thus, there will be greater competition for the fuel resources available.

Some think fusion will provide a relatively safe, green alternative to fossil fuels; enabling the production of vast amounts of energy from abundant sources.

When will the first commercial fusion reactor be built?

Not for a long time. Experimental fusion reactors like the Joint European Torus (Jet) at Culham in the UK currently use more energy than they release.

There are therefore many major scientific and engineering hurdles to overcome before the technology becomes commercially viable. A commercial reactor is not expected before 2045 or 2050 - if at all. Indeed, there is no guarantee that Iter will succeed.

The running joke is that fusion has been "just decades away" for several decades.

And many commentators, particularly those greens who have fought long campaigns against nuclear fission, are deeply suspicious of fusion.

The Political Future of Nuclear Fusion

How Does The Sun Produce Energy? - Universe Today