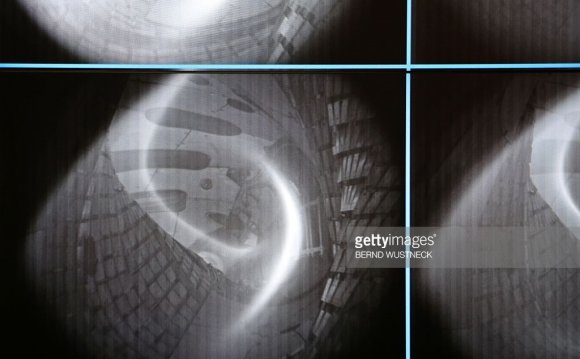 This is a screenshot image of the plasma isolated by Wendelstein 7-X. (© picture alliance / dpa) Physicists at the Max Planck Institute (MPI) in Greifswald, Germany were responsible for a major scientific breakthrough on December 10. With a single tweet, the team responsible for plasma physics announced that it had isolated its first plasma using an ultra-high-tech stellarator, named Wendelstein 7-X (W7-X). The stellarator, which cost 1.1 billion dollars to build, is one of the world’s largest, and evidently most effective, nuclear fusion machines.

A crowd of reporters gathered in the Plasma Physics lab on Friday evening to witness the inauguration of W7-X. The machine was pumped full of helium gas and heated up to 100 million degrees Celsius. The extreme heat stripped the helium atoms of their electrons, creating ions. As these ions bounced around the stellarator, they collided and fused, creating plasma.

As scientists and reporters waited to see if W7-X would be able to handle the high heat and energy, a flash of light appeared on the screen. The crowd erupted in cheers. The plasma was only on screen for one tenth of a second, but the potential was clear. “We’re very satisfied, " said Hans-Stephan Bosch, the leader of the MPI team. "Everything went according to plan."

The process of nuclear fusion releases massive amounts of energy. Until now, nuclear power plants around the world have been using nuclear fission, which is the splitting of an atom, as an energy source. Since nuclear fusion creates no radioactive byproducts, this discovery has the potential to become a truly clean power source. Best of all, the resource needed for nuclear fusion is hydrogen, which is nearly limitless on this planet.

Scientific director Sybille Guenter holds up a colourized computer image showing the first plasma isolated using W7-X. (© picture alliance / dpa) Nuclear fusion is the energy that keeps the sun and billions of other stars burning. Scientists have been trying to achieve controlled nuclear fusion for decades, but until now the machines used have been unable to sustain the necessary temperatures to achieve controlled fusion. W7-X’s success could be a model for other fusion machines. After continuing to work on creating plasma from helium gas, the MPI team hopes to move on to hydrogen gas.