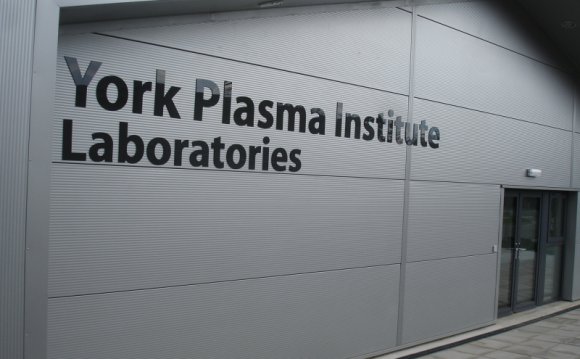 I am doing a PhD in Inertial Confinement Fusion (ICF) under the supervision of Dr John Pasley and Dr Nigel Woolsey. My research involves investigating aspects of the physics of electron generation, heating and transport which occur in intense laser interactions with plasma.

H-mode tokamak plasmas are characterised by steep pressure and current density gradients. Consequently, they are vulnerable to edge localised modes (ELMs), which are eruptions that seriously damage plasma facing components of the tokamak as well as relaxing the temperature profile of the plasma.

As a result, understanding and controlling these instabilities is important for future tokamak devices like ITER, in order to increase the efficiency and lifetime of the device. A promising way refers to the application of resonant magnetic perturbations (RMPs) that destroy the axisymmetry of the magnetic field at the plasma edge. Complete suppression of ELMs has been observed in DIII-D, AUG and KSTAR, while mitigation occurred in MAST and JET. This project will employ a combination of high performance computing using the BOUT++ code and development of reduced analytic models to probe the physics of RMPs in tokamak plasmas. This new knowledge will then be employed to understand the impact of the plasma perturbations on peeling-ballooning stability in an attempt to understand ELM mitigation or suppression.

I'm currently working towards my PhD, studying the interaction of Extreme Ultraviolet lasers with plasmas. During the course of my project, I have carried out experiments creating very dense plasmas using these lasers, which have very short wavelengths. I have also created and interpreted computer models and to accurately understand what is going on in my experiments.

My work has applications to the Inertial Confinement approach to fusion, which aims to use lasers to compress and subsequently 'ignite' a pellet of fuel for fusion. Understanding the dense plasmas which I have worked with and their interaction with laser light is important to this application. My supervisor is Prof Greg Tallents, who has a lot of experience in EUV and soft x-ray lasers and laser produced plasmas.

I am studying for a PhD under the joint supervision of Prof Kieran Gibson (York) and Dr Anna Widdowson (CCFE). My research focuses on erosion, deposition and material migration on JET, where I will be based for the majority of my project. The erosion of tokamak walls by physical, chemical and thermal mechanisms is strongly dependent on the wall materials used. In 2010, the carbon wall of JET was replaced with beryllium in the main chamber and tungsten in the divertor, with this 'ITER-like wall' providing the first test of the material combination to be used in ITER. The erosion/deposition under ITER-like wall operation is characterised with reference to plasma configurations and parameters, and compared to carbon operation. This work uses a combination of post-mortem surface analysis techniques, empirical modelling and in-situ diagnostics such as rotating collectors and quartz microbalances.