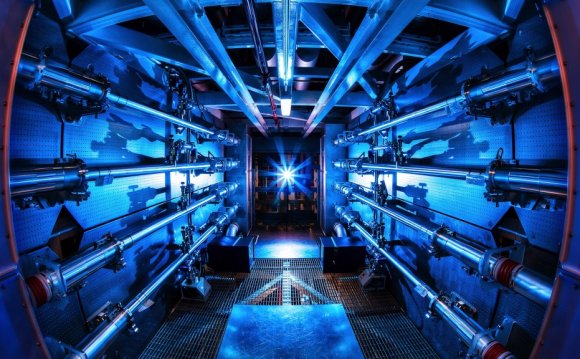 The only way you can make them stick is to smash them together so hard they melt. For steel ball bearings, that means raising the temperature to above 1, 500°C. To smash hydrogen atoms together and make them fuse, you need a temperature around one hundred million degrees.

That is hot. Unimaginably hot.

So, that means a huge amount energy needs to be put into a fusion reactor just to get it started.

There are several approaches to this. The most common is to use extremely large and powerful superconducting magnets that produce a super-hot plasma. The world's largest fusion project, ITER, does this using a rapid series of magnetic pulses, while the new German reactor called Wendelstein 7-X is powered continuously, which is more efficient.

In theory, once the critical temperature of the fuel is reached and maintained long enough, about 10 times more energy should come out of the fusion reaction than was put in. ITER is expected to produce 500 megawatts of power from only a 50 megawatt input. So far, that goal has not been reached.

Which brings us to the second problem of temperature.

When you have a material that is hotter than the centre of the sun, there is no material on Earth that can hold onto it without being vapourized. So, you have to contain it without touching it. That's the second job of the super-conducting magnets.

The magnets are arranged in a way that shapes the plasma into a donut, called a torus, that is held suspended in the middle of a donut-shaped container by the invisible fingers of the magnetic field. That way, the walls of the container can be cooled, while the hot plasma circulates like a halo floating in the centre without touching anything.

The challenge has been designing magnets that produce a perfect torus, because if the plasma touches the walls, either the container is damaged, or the reaction stops.

In tests, 192 laser beams were briefly fired into this cylinder, compressing the capsule to create the extremely high pressures and temperatures needed to get the hydrogen atoms to fuse. (Eddie Dewald, Lawrence Livermore National Laboratory/Associated Press)

These expensive megaprojects have been criticized for consuming huge amounts of money without much to show for it. Perhaps, critics say, those resources should be funneled towards other clean energies, such as wind, solar and geothermal.

The problem is that those other technologies alone could not meet our rising demand for more power. Solar and wind are great sources of clean energy, but they are spread out over large areas, so we would have to cover the entire country with solar panels and windmills, and it still might not be enough to meet the demand.

Fusion power has a huge output from a small space, so it can provide the constant base load that keeps our city lights on when the wind doesn't blow and the sun doesn't shine. It's an expensive long shot, but scientists are convinced that the eventual payback of clean energy will be worth it.