What is Plasma fourth state of matter? 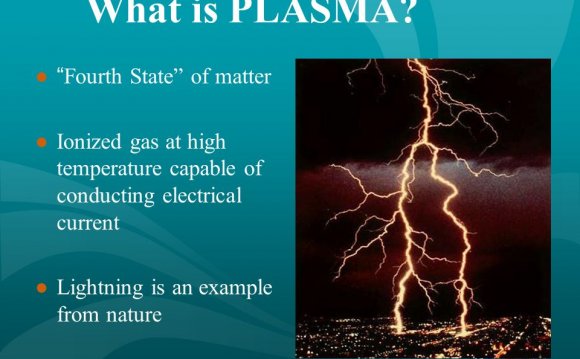 Everyone is familiar with three of the traditional states of matter (liquid, gas and solid) but the fourth fundamental state is one that is less well known, which seems ridiculous as it is the most common in the whole universe. Of course I am referring to plasma, a state of matter quite unlike any else…

Plasma is defined as a state of matter predominantly comprised of ions and electrons. An ion is formed when an atom or molecule gains or loses electrons, yielding an overall charge (either positive or negative). The presence of charged ions means that a plasma is highly electrically conductive and responds strongly to magnetic and electric fields. Its behaviour is most comparable to that of a gas, as the plasma has no defined volume but instead assumes the volume of the container it is in. Despite all of the constituent particles being charged, typically the plasma itself has no overall charge. However, some plasmas (non-neutral) can be created with an overall charge (either positive or negative) and are composed of pure electron, ion, positron, or antiproton plasmas.

Plasmas commonly form by heating a gas to searing temperatures. When heated, the atoms in the gas either gain or lose electrons (ionization) and the end result is a charged particle plasma. Packed full of charged particles (positive ions, electrons, or negative ions), the plasma can also be created by breaking any molecular bonds with a magnetic field via a device such as a laser. The record for the hottest plasma formed on Earth measures a scorching 6 trillion degrees Celsius (10.8 trillion °F)! Definitely hotter than the temperature of the centre of the Sun, which comes in at a puny 5 million °C (9 billion °F).

This record temperature was recorded in the Large Hadron Collider; where scientists smashed lead ions, creating a quark-gluon plasma to simulate conditions at the start of the universe. Maintaining plasma is a fine art; it requires careful use of energy, balancing the number of electrons stripped from one nucleus and the number of electrons that recombine with another nucleus. The recombination emits a unique glow of light, characteristic of plasmas. If too many electrons are captured, the plasma will return to a traditional gas state; if too few recombine, the energy required in maintaining the plasma will increase.

Examples of plasmas are varied and many, but a few examples are particularly intriguing with lightning as possibly the most famous of all. When lightning forms, air molecules are stripped of their electrons, creating a conducting path and allowing clouds to discharge a huge amount of electrical energy at temperatures of around 30, 000 °C (54, 000 °F). A more accessible example is the plasma display TV. Noble gases are confined to tiny cells spread across the face of the display in a way so that when high voltages spread across the cell a plasma is created and UV photons are released (a result of energy changes from recombined electrons). The photons are then absorbed by the coating of the cell, subsequently emitting photons in the visible spectrum, producing the pixels we see on the screen.

Plasmas are also extensively researched by many scientific fields, in particular fusion reactors. Here high energy plasmas are created in order to fuse Hydrogen atoms to make Helium – the same process which powers stars. An example of a plasma-based fusion reactor is the Joint European Torus, located in Oxfordshire, UK, where the plasma is contained in a torus-shape using a combination of magnetic fields in different orientations. In such reactors, the plasma mimics the high temperature, high pressure conditions in a star creating an environment where nuclear fusion can occur. This could prove to be an incredible break through, as fusion promises a power source without the radioactive waste associated with fission reactors or the greenhouse gases produced by coal and oil power stations. The field of plasma physics is full of fascinating properties, applications and mathematics. We are just scratching the surface of possibilities in this intriguing field and who knows what amazing discoveries the future holds.

Plasma is the fourth state of matter.