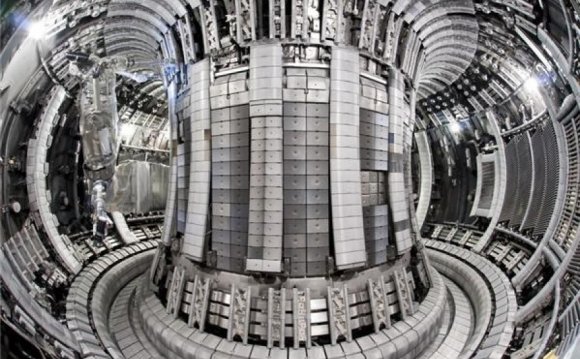 A star is born. And, less than a second later, it dies. On a drab science park just outside the Oxfordshire village of Culham, some of the world's leading physicists stare at a monitor to review a video of their wondrous, yet fleeting, creation.

"Not too bad. That was quite a clean one, " observes starmaker-in-chief Professor Steve Cowley. Just a few metres away from his control room, a "mini star" not much larger than a family car has just burned, momentarily bright, at temperatures approaching 23 million degrees centigrade inside a 70-tonne steel vessel.

Cowley sips his coffee. "OK, when do we go again?"

Last year, when asked to name the most pressing scientific challenge facing humanity, Professors Stephen Hawking and Brian Cox both gave the same answer: producing electricity from fusion energy. The prize, they said, is enormous: a near-limitless, pollution-free, cheap source of energy that would power human development for many centuries to come. Cox is so passionate about the urgent need for fusion power that he stated that it should be scientists such as Cowley who are revered in our culture – not footballers or pop stars – because they are "literally going to save the world". It is a "moral duty" to commercialise this technology as fast as possible, he said. Without it, our species will be in "very deep trouble indeed" by the end of this century.

If only it were that simple. Fusion energy – in essence, recreating and harnessing here on earth the process that powers the sun – has been the goal of physicists around the world for more than half a century. And yet it is perpetually described as "30 years away". No matter how much research is done and money is spent attempting to commercialise this "saviour" technology, it always appears to be stuck at least a generation away.

Cowley hears and feels these frustrations every day. As the director of the Culham Centre for Fusion Energy, he has spent his working life trying to shorten this exasperating delay. Fusion energy is already a scientific challenge arguably more arduous than any other we face, but recent events have only piled on further pressure: international climate-change negotiations have stalled; targets to ramp up renewable energy production seem hopelessly unrealistic; and the Fukushima disaster has cast a large shadow over the future of fusion's nuclear cousin, fission energy, with both Germany and Italy stating that, owing to safety concerns, they now intend to turn their back on a source of energy which has been providing electricity since the 1950s.

But today Cowley seems upbeat, chipper even. After an 18-month shutdown to retile the interior of the largest of the centre's two "tokamaks" – ring doughnut-shaped chambers where the fusion reaction takes place – he is bullish about the progress being made by the 1, 000 scientists and engineers based at Culham.

"By 2014-15, we will be setting new records here. We hope to reach break-even point in five years. That will be a huge psychological moment."

Cowley is referring to the moment of parity when the amount of energy they extract from a tokamak equals the amount of energy they put into it. At present, the best-ever "shot" – as the scientists refer to each fusion reaction attempt – came in 1997 when, for just two seconds, the JET (Joint European Torus) tokamak at Culham achieved 16MW of fusion power from an input of 25MW. For fusion to be commercially viable, however, it will need to provide a near-constant tenfold power gain.

So, what are the barriers preventing this great leap forward?

"We could produce net electricity right now, but the costs would be huge, " says Cowley. "The barrier is finding a material than can withstand the neutron bombardment inside the tokamak. We could also just say damn to the cost of the electricity required to demonstrate this. But we don't want to do something that cannot be shown to be commercially viable. What's the point?"