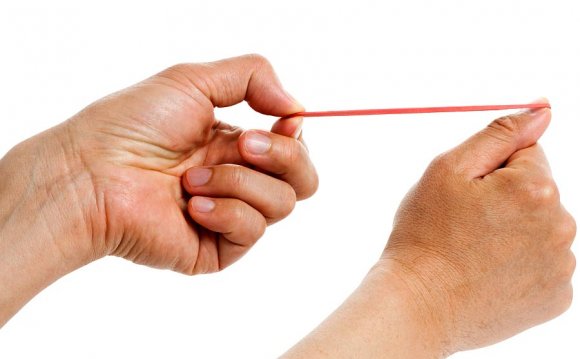 Katharina Röttger, Faculty prize winner for 2014 at Kiel University, investigated a chemical process in DNA base pairs, together with colleagues, using extremely short pulses of light.

UV radiation often damages our DNA. Researchers at Kiel University and The University of Bristol, Great Britain, have now seen for the first time what happens in DNA building blocks when they are stimulated by ultraviolet light, and what they do to prevent themselves from being destroyed. The results show: the molecules use the absorbed energy to set off a completely harmless reaction which prevents the genes being altered. The study can be found in the current edition of the journal Angewandte Chemie (Applied Chemistry).

Our DNA contains the bases adenine, guanine, cytosine and thymine. The chemists used ultra short blasts of light to shoot base pairs guanine and cytosine which were stimulated with UV light. They were only able to reveal the protective molecular mechanism using this method of femtosecond spectroscopy, because the process happened within a few quadrillionths of a second.

During the so-called electron-driven proton transfer process (EDPT), a hydrogen atom is displaced within the molecular compound. The base pair, however, immediately returns to its original starting structure from the same procedure. "Nature uses the reaction to strengthen the DNA's resistance to light by orders of magnitude - it is sort of a sun protection for DNA, " said Professor Friedrich Temps, head of the Kiel research team from the Institute of Physical Chemistry. "The DNA building blocks themselves thereby relieve the cells' hugely complex and very slowly active repair mechanisms using enzymes. The discovery of these enzymes this year was awarded the Nobel Prize for Chemistry. Without the passive processes we observed, the cells' active repair mechanisms would be completely overloaded, " added Professor Andrew Orr-Ewing, head of the team in Bristol.

In a few cases, however, the base pair was not able to return to the original situation. Here, EDPT caused two hydrogen atoms to be displaced. "The product could be a mutagen precursor and lead to DNA damage, " explained Dr Katharina Röttger from the English working group, who received her doctoral degree in Kiel. Future experiments will have to show what then happens to this molecule. "We can only say that the potentially mutagen molecule survived our measurement time frame of one nanosecond (= a billionth of a second), " said Röttger.

The scientists now want to find out whether the same processes also occur in a long DNA strand. The many interactions within and between the molecules and in the hydrogen bridges make this undertaking more complicated, however. Extremely fast reactions are often covered up by slower ones. Professor Temps and Professor Orr-Ewing are confident that the analysis tools of their working groups will soon be able to solve this puzzle, too.

The above post is reprinted from materials provided by Christian-Albrechts-Universitaet zu Kiel. Note: Materials may be edited for content and length.