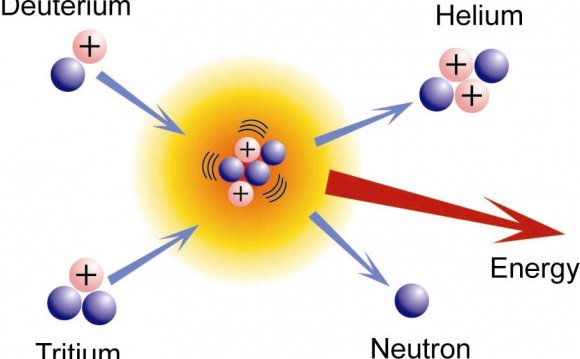 An erupting, massive star in the Milky Way. NASA's Hubble Space Telescope has identified one of the most massive stars known, emitting as much as 10 million times the power of our Sun and with a radius larger than the distance between the Sun and the Earth.
Click on image for full size
Image courtesy of NASA, Space Telescope Institute

Fusion in the core of stars is reached when the density and temperature are high enough. There are different fusion cycles that occur in different phases of the life of a star. These different cycles make the different elements we know. The first fusion cycle is the fusion of Hydrogen into Helium. This is the stage that our Sun is in.

The fusion reactions occurring in stars makes neutrinos that reach Earth. By detecting these neutrinos, scientists learn about fusion inside the stars.

Lecture: Nuclear Fusion: Engine of the Stars and Energy of ...