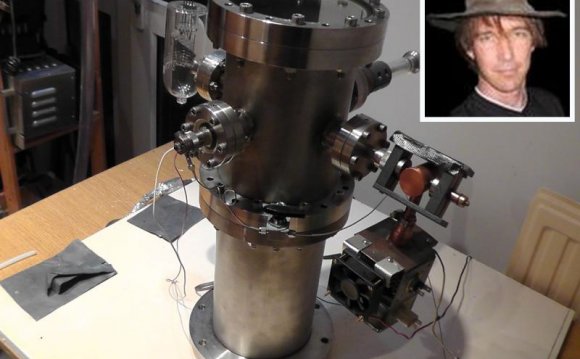 How would you like to replace your water heater with a nuclear reactor? That’s what Joseph Zawodny, a senior scientist at NASA’s Langley Research Center, hopes to help bring about. It would tap the enormous power of the atom to provide hot water for your bath, warm air for your furnace system, and more than enough electricity to run your house and, of course, your electric car.

So what is LENR and how might it one day fill all your energy needs without risk of blowing up, melting down, or irradiating the neighbors?

Nuclear energy in a nutshell

Joseph Zawodny holds a device with which he simultaneously conducted 48 LENR experiments, each using a different oscillation frequency.

The nuclear generators which currently provide some of the world’s electricity use a type of fission in which a very heavy nucleus (meaning one with lots of protons and neutrons) such as uranium breaks up into two or more lighter nuclei, releasing energy in the process.

The sun and all the other stars use nuclear fusion, in which two light nuclei (such as those of hydrogen) fuse together in an environment of very high temperature and pressure which overwhelms the mutual repulsion of their positive charges. Again, energy is released in the process—even more than in fission. We know how to use fusion in hydrogen bombs, but so far we lack the technology needed to harness it for more civilized purposes.

In the 1980s, two scientists named Stanley Pons and Martin Fleischmann announced that they had developed a “cold fusion” process that could create fusion through chemical means, without the high temperature or pressure of stars and bombs. There was no theory to explain how that could be possible, and other scientists were unable to reliably reproduce the experiments, so cold fusion lacked credibility for most physicists. Some scientists have continued working on this idea though, and they sometimes call it “LENR.” But this process is not what Dr. Zawodny is exploring.

“There are a lot of people who are trying to just build something without understanding anything, ” Zawodny said. “It worked for Edison and the light bulb, but it took him a long time and that was a simple system. This is very complex. And if they make something that just barely works, and accidentally one in a thousand works really, really well, it's going to take down a house with their trial-and-error method.”

“Several labs have blown up studying LENR and windows have melted, ” according to Dennis Bushnell, Langley’s chief scientist, in an article he wrote for NASA’s Future Innovation website. This, he wrote, indicates that “when the conditions are ‘right’ prodigious amounts of energy can be produced and released.” But it’s also an argument for the approach that the Langley researchers favor: master the theory first.

In theory, a metal (gray) holding hydrogen ions (purple) as a sponge holds water (called a metal hydride) can provide one potential fuel for LENR.

“For NASA Langley, ” according to Bushnell’s article, “the epiphany moment on LENR was the publication of the Widom-Larsen Weak Interaction LENR Theory, ” which was published in 2006. According to Zawodny and Bushnell, this theory provides a better explanation than “cold fusion” for the results which researchers have obtained over the last couple of decades. And it might explain much more than that. At a meeting of the American Nuclear Society in November 2012, the theory’s co-developer, Lewis Larsen, speculated that LENR may occur naturally in lightning—not only on present-day Earth, but also in the primordial cloud of gas and dust that became our solar system. If true, LENR might solve a mystery uncovered by NASA’s Genesis mission, that the pattern of oxygen isotopes on the sun differs greatly from that of Earth.