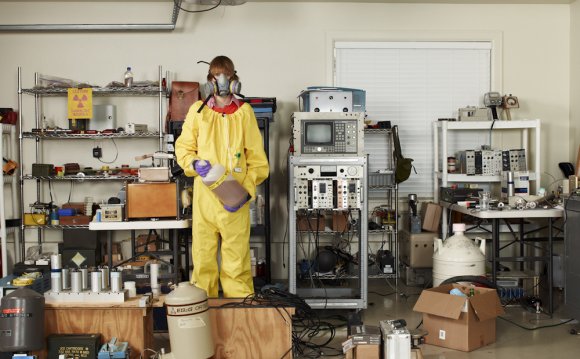 “I realized that the biggest problem we face — what all these other problems come down to — is energy, ” says Wilson. “This is a talk about fission — about taking something old and bringing it into the 21st century.”

Wilson has invented Small Modular Fission Reactors. These reactors are small, meaning that they can be built in factories and shipped wherever they need to go. They are installed three meters underground — making them far safer from a counterterrorism standpoint than something aboveground. And these are molten salt reactors, which means that they have the potential to run on the waste from old nuclear weapons — making the wide distribution of this technology a potential way to secure the material from weapon stockpiles.

As Wilson explains, one of the problems with traditional nuclear power plants is that they only run for 18 months before needing refueling. Small Modular Fission Reactors, on the other hand, will run for about 30 years before they run out of juice. This means that they will be a closed system while they are in use, making them safer. And after the 30-year mark, these reactors can be sealed up and discarded.

“Everybody after Fukushima had to reasses the safety of nuclear, ” says Wilson. “When I set out to design a reactor, I knew it had to be passive and intrisically safe.”

As Wilson explains, because the material in Small Modular Fission Reactors is already molten, meltdowns won’t be a factor. And in the case of a disaster, the core can be drained to a tank underneath, stopping the reaction.

Wilson is excited about the potential of Small Modular Fission Reactors because they could provide carbon-free electricity for homes and businesses, helping to combat climate change. And because they are produced in factories, for cheap, they may be a way to bring power to the developing world. Wilson excitedly tells TED curator Chris Anderson that he hopes to have Small Modular Fission Reactors to market in five years.

But Wilson sees other potential for these reactors — to fuel scientific exploration in other areas, perhaps even space.

“Imagine having a compact reactor in a rocket that produces 50-100 megawatts. That’s the rocket designer’s dream, ” says Wilson. And it isn’t inconceivable, considering that plutonium batteries have been sent into space aboard rockets. “I think there’s something poetic about using nuclear power to propel us to the stars. Because the stars are giant nuclear power reactors themselves.”