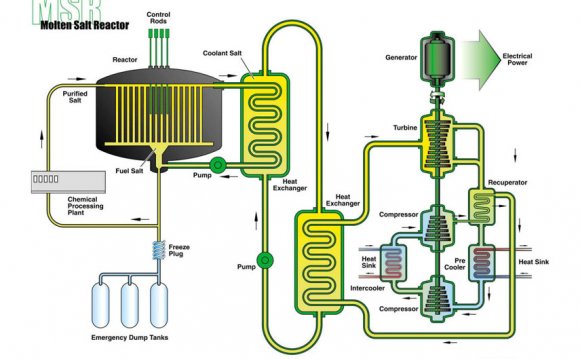 Back in August the news broke that Hyperion Power Generation had found someone to buy the first of its portable nuclear power units. While I’m sure many doubts about this technology remain in people’s minds, a recent interview with Hyperion CEO John Deal sheds some more light on the whole notion of portable nuclear power. Here are some highlights from Techrockies:You Can’t Turn Our Fuel Into a Bomb
On safety:

The way that you sustain a chain reaction for nuclear energy is through the use of a moderator. This is Nuclear Energy 101. A moderator is a necessary part of almost all power-producing reactors. What it does is slow down the neutrons so that those neutrons that are being shed by the uranium, as it breaks apart, can be grabbed by other uranium atoms. That fracturing process is called fission, and that's how you get heat.

Our fuel is very unique. It's uranium hydride. UH3 is the chemical formula. Low-enriched, about 10 percent [uranium isotope]-235, the rest is U-238. By comparison, bomb-grade fuel is about 98 percent enriched.

You can't turn our fuel into a bomb. You'd have to re-enrich, re-process the fuel, so you might as well start with yellowcake. That's one of the neat safety features of our reactor. For nefarious purposes, our reactor has absolutely no value whatsoever.


Waste After 10 Years the Size of a Football
On how to dispose of fuel:
We're going to take it back to the factory and we're going to reuse most of it.

The waste that comes out of our reactor after powering 20, 000 homes for 8-10 years is about the size of a football. Using coal and gas over the same time frame, the waste stream for just you, after factoring in CO2 emissions, would overflow Mile High Stadium in Denver. So our waste stream is very concentrated, and yes, we have to do something with it, but there are known ways of dealing with it.

The U.S. has a different political philosophy, but from a technical standpoint, dealing with waste is really not complicated. It's a regulatory complication, it's a political complication, it's a social complication. We have enough uranium to power the planet for the next thousand years, but the problem again is the waste, so you want to handle that waste in a smart manner and not just put it in a pond somewhere.

Depending on where the waste originates will determine how we dispose of that waste because there are different regulations depending on where you are in the world. We know how to deal with it. For security reasons, we're not disclosing what will happen to it, but it's not going to just sit in some bucket somewhere. Recycling was "baked in" to our reactor design from the beginning.


When Will This Be Ready?
6/13 is the number that sits above my desk. We ship in June of 2013, our first customer install. We will make that date.

We have an engineering plan that goes out in a couple of years, but we built in a robust contingency. Even though we have a very well thought out engineering plan, we have already put in twice as much calendar time as we need to go to market because you just don't know. There could be regulatory issues, supplier issues ….

Again, we're not trying to rush. We're not competing against some release by Microsoft or something Exxon is coming out with. We're alone in the market space with this.

Nuclear energy is very traditional, it's very well known. Word about this kind of reactor—a uranium hydride reactor from Los Alamos—it was first talked about 20 years ago. This is not a new product; this is a new product coming out to the market.