Sun in a Bottle 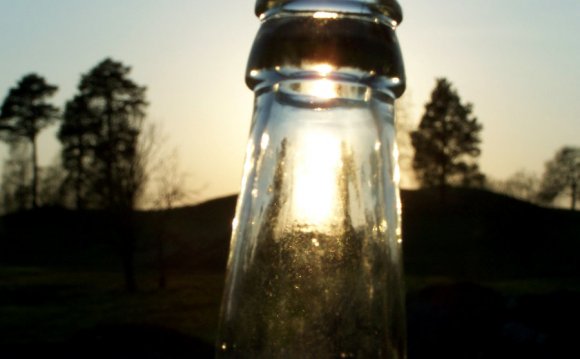 Some fear plastic bottles may release harmful ingredients when exposed to the sun.

If you regularly buy bottled water, you are not alone. The U.S. Environmental Protection Agency reported that more than 2.6 million tons of plastic bottles with resin code PET were generated in 2010. (See Reference 1, Page 8) Some may view bottled water as a healthier alternative to other beverages, such as carbonated soft drinks, but plastic water bottles present something of a conundrum. On the one hand, you may find them useful, especially for refilling and reusing them again; reuse helps reduce landfill waste. On the other hand, a concern exists that plastic bottles may release harmful ingredients when exposed to the sun.

The question of water bottles and sun exposure focuses on the presence of a chemical in plastics called bisphenol A, or BPA. Research with mice has shown a link between exposure and adverse effects in brain and reproductive organ development. While most plastic water bottles don't contain BPA, polycarbonate water bottles do contain this chemical. In 2012, the U.S Food and Drug Administration rejected a petition by the Natural Resources Defense Council to ban BPA, based on current research. However, the NRDC is investigating the next steps it can take change this ruling. (See References 2, 3 and 6)

Another concern you may have is the development of potentially harmful bacteria in an opened water bottle exposed to the sun. Heat can accelerate bacteria growth; however, in some cases, the opposite may be true. Eawag, the Swiss Federal Institute of Aquatic Sciences and Technology, developed a procedure called solar water disinfection, or SODIS. The premise is simple: six hours of sun exposure using a PET water bottle you would normally find at the grocery store essentially kills disease-causing bacteria. The answer lies in the ultraviolet radiation. (See Reference 5)

Bacteria and Normal Use

While SODIS may be effective, you may not be able to replicate the process easily. Besides the time consideration, the condition of the water bottles may also affect bacteria development; used bottles with scratches from wear may harbor bacteria. (See Reference 3) In addition, the intensity of UV light presents a factor you cannot control. While in certain conditions sun exposure may inhibit bacteria, it can redevelop once the bottle is out of the light.

Since BPA exposure remains questionable, you may want to consider only using clear water bottles without BPA. Bottles marked with the recycle codes No. 3 or No. 7 may contain this chemical. Look for the code on the bottom of the bottle. As a general precaution, keep water bottles out of the sun, preferably in a cool place, to keep temperatures lower and prevent the release of BPA from the bottles that contain it. (See Reference 3)

Sun Dogs- Message In a Bottle

Catweazle #1 The Sun in a Bottle (NL)