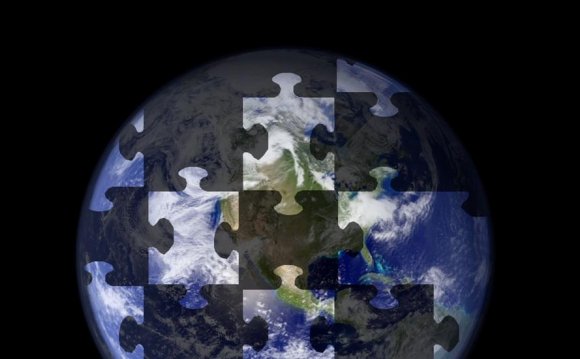 This microgear spins clockwise due to the temperature gradient between its inner and outer vertices, which causes capillary forces in the liquid to pull at the gear unevenly. Credit: Maggi, et al. ©2015 Nature Communications

(Phys.org)—Scientists have demonstrated that pinwheel-shaped microgears floating on a liquid surface can rotate at speeds of up to 300 r.p.m. when illuminated by an ordinary LED. This light-driven motion, which arises because the light creates a tiny temperature difference and, subsequently, a surface tension difference in the surrounding fluid, is about five orders of magnitude more efficient than other mechanisms that convert light into work. As the effect is not size-dependent, the scientists expect that the system could be scaled to both the macroscale and the nanoscale.

The researchers, Claudio Maggi and coauthors from the University of Rome, the Italian Institute of Technology in Genova, and the NANOTEC-CNR Institute of Nanotechnology in Rome, have published a paper on the new demonstration of light-to-work conversion in a recent issue of Nature Communications.

In their study, the scientists fabricated the microgears using laser lithography, coated them with a layer of amorphous carbon to increase light absorption, and immersed them in a liquid. They then deposited a small drop of the gear-containing liquid onto a microscope glass slide and illuminated it with an LED. While previous light-driven motors generally require high-power laser beams to induce motion, here the wide-field LED could induce motion with just a few microwatts of power per gear, corresponding to a 100, 000 times higher light-to-work conversion efficiency.

The reason for the increase in efficiency is that the new system operates under an entirely different light-to-work conversion mechanism. Previously, similar systems have relied on either the radiation pressured exerted by highly focused laser beams, or on thermophoresis, which is the slow migration of solid particles induced by thermal gradients in the surrounding fluid. To achieve thermophoresis, half of the particle is covered in a heat-absorbing coating, so that when exposed to strong illumination, the particle will be propelled along a temperature gradient.

The video will load shortly

In the new system, the motors are entirely covered in a heat-absorbing coating, so that they are mostly uniformly heated. However, the inner vertices of each motor's pinwheel shape become hotter than the outer ones, which generates an asymmetric temperature gradient in the surrounding fluid. Since surface tension usually decreases with temperature, this temperature gradient—even when as small as a few millikelvin—causes a surface tension gradient, meaning that capillary forces in the fluid pull at the microgears unevenly. The uneven pulling results in a net torque, causing the microgears to spin rapidly.

In the future, this efficient light-driven motion could be used in a variety of applications on different scales, from miniature solar vehicles to nanomachines.

"Solar vehicles allow transport on land, water and in air using sunlight as a primary source of energy, " Maggi told Phys.org. "The conversion of light into movement generally requires some transformation stages between different forms of energy. Typically they are electric vehicles powered by photovoltaic cells that convert in a first stage sunlight into electrical energy. This indirect strategy, however, involves a high degree of complexity that puts big limitations on the miniaturization of solar engines on the micrometer scale."